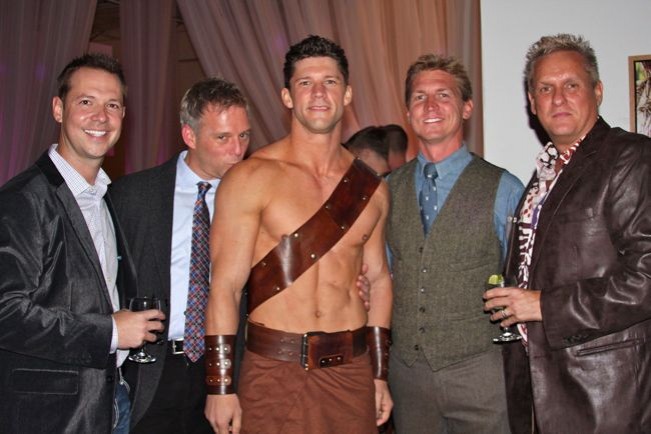 With distracting aerialists, dancers, stilt-walkers, drag queens and roaming models, it was almost secondary that so many famous faces turned out Saturday to fete GLAAD’s 25th and honor 30 LGBT Atlantans.

But while playing Spot the Celebrity, roving eyes of male guests and celebs alike kept landing on two crews of male models. All that was missing was an oil-wrestling match for dominance between the ROKK Vodka gladiators (top photo with guests) and models from the new “North vs. South” calendar by Richie Arpino (second photo, center).

A wrestling match wouldn’t have been out of place with so many performers, including Atlanta Ballet dancers on the floor and Cirque-style acrobats on the ceiling. There was also enough drag for a party game of Drag: Now and Then. Charlie Brown, Bubba D. Licious and The Lady Chablis were representing alongside newer female impersonators like Phoenix, Angelica D’Paige and Janelle Brooks.

As if there weren’t enough stimuli already, the Gay & Lesbian Alliance Against Defamation also had some business to attend to. Five at a time, some 30 local LGBTs took the stage to have medals of honor placed around their necks.

The diverse list of Atlantans honored at the event were: