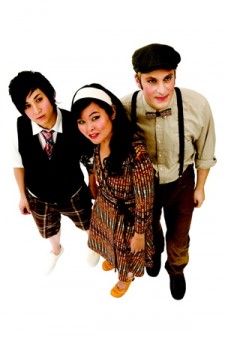 OK, so who is Girlyman? Glad you asked. If you haven’t already heard about this queer trio made up of Doris Muramatsu, Ty Greenstein and Nate Borofsky, let Mire, their Saturday opener, school you.

“Girlyman is one of my favorite bands ever,” Mire says. “If you’ve ever seen them live, it’s the closest thing to gay church I’ve ever experienced. It’s so life affirming, they’re so funny in their banter between songs, and their harmonies and chemistry on stage are just amazing.

“It’s not just a concert, because it feels so much bigger than that,” he adds. “It’s a one-of-a-kind experience.” 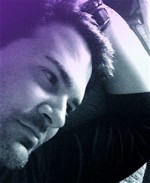 “This album is more pure, natural sounding, with organic instruments and backup singing that gives it a much fuller sound,” Mire says of his newest work. “I’m really happy with it.”

“Never Regret the Nights” is produced by Clay Cook, an Atlanta native and music industry wunderkind who has written for John Mayer and most recently is part of the 2009 AMA-winning and Grammy-nominated Zac Brown band.

Former solo artist Fishell, an Atlanta singer-songwriter whose lyrics are often quirky, often fun, but can also sucker-punch listeners with heartfelt truisms, performs as a duo now under the name The Wayne Fishell Experiment (bottom photo).

With a drumming, singing cohort called big.peaches in tow, the overall sound of Fishell’s guitar-driven “gay acoustic indie folk pop” has more depth these days than his early solo efforts. They open Girlyman’s Friday show at the Crimson Moon in Dahlonega. Get a preview of their sound here.

But why are both Mire and Fishell beside themselves to open up for Girlyman? For starters, some have said that the members of Girlyman are so tight, they can read each other’s minds. On stage, they’re known for finishing each other’s sentences and bursting into improvised three-part harmonies that are so good that they seem rehearsed.

Informed by ‘60s groups like Simon & Garfunkel and The Mamas & the Papas, and infused with years of classical and jazz training, Girlyman songs are an auditory dance of harmony, melody, genderfuck playfulness and airy suspensions that create an irresistible blend that the Village Voice has called “really good, really unexpected, and really different.”

Other critics, musicians and fans soon took notice. With supporters including Indigo Girls, Margaret Cho and Dar Williams, it was only a matter of time before they became something of a cult phenomenon. “Girlyfans” often travel hundreds of miles to show up at the band’s tour stops across the country.

Muramatsu and Greenstein have been friends since elementary school, and they immediately clicked with Borofsky at a talent show some years later. The three started Girlyman in 2001 as a Brooklyn-based band, but left New York a few years ago to make Atlanta their home base. Since arriving in Atlanta, the Girlyman members have become friends with Mire, and Muramatsu sings on three songs on Mire’s album.

It’s a good bet that she will join him on stage for his Eddie’s Attic performance, he hints.

“It’s sort of a dream come true as an artist,” Mire says. “When you admire another artist so much, and you get to perform with them, you just feel so honored, and I can’t wait to see it come together live.”

Most recently, Girlyman has been co-writing songs with Cho for her upcoming album, “Guitarded.”

On the Girlyman website, Cho says, “They seamlessly blend folk, country, pop, and rock, and they genre bend as fearlessly and flawlessly as they gender-bend. It’s the music of my heart and soul. Girlyman is the future and the past and the present.”

Wow. Quite an endorsement. Come hear Girlyman live up to it at Crimson Moon, Eddie’s Attic—or both—and be sure to listen up for their amazing opening acts, who have been on our playlists for years and are sure to add to their own fan bases during the Friday and Saturday shows.