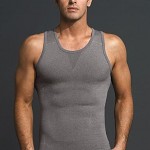 In a development that pushes the limits of even metrosexuality, girdles for guys are catching on.

Australia-based Equmen comes out Jan. 10 with its Core Precision Undershirt, a body-slimming shirt designed to trim a few inches off around the middle through engineered compression technology.

And now popping up in men’s clothing departments are body-sculpting, flab-corraling undergarments known as men’s girdles, or even “mirdles.”

Starting in January, Australia-based Equmen will sell a body-slimming Core Precision Undershirt designed to squeeze a few inches off a man’s beer belly and improve his posture. It will be available in the United States and Europe via www.equmen.com.

“This is a garment designed to physiologically and visibly improve men’s bodies,” said Corie Chung, one of the company’s founders. “Men these days are concerned about their appearance, and they also want to feel healthy and supported.”

Nevertheless, Atlanta-based retailers are trying to get in the guy girdle market, too.

Atlanta-based Spanx, whose nylon and spandex undergarments for women are worn by the likes of Oprah Winfrey, plans a collection for men next year.

“We have had a ton of requests for Spanx for men,” said spokesperson Misty Elliott. “After seeing our success with firming women’s butts, men are asking Spanx to help them flatten their guts.”

“Today’s men are more style- and image-conscious, and they’re ready to take advantage of the same style tricks that women have,” Elliott said.

What’s the rush? The apparent market for all this new guy stuff.

In general, retailers say that a younger generation of men is paying more attention than their fathers to fashion necessities like underwear. Market researcher NPD Group reported that sales of men’s underwear in the United States jumped 7.8 percent between 2005 and 2007 to reach 1.1 billion units, while sales of women’s underwear climbed by just 2.3 percent to reach 1.5 billion units.