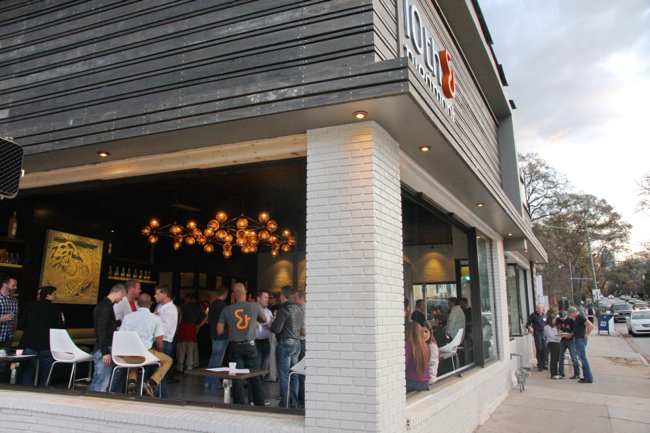 Gilbert’s offered a sneak peek of its new space on Sunday, showing that Blake’s new neighbor will not only continue its savory offerings but add an upscale bar and lounge to grab its own piece of the gay nightlife pie. A $20 donation snagged a complimentary cocktail and hors d’oeuvres at the preview of 10th & Piedmont, the latest offering from the gay-friendly owners of Gilbert’s. The early-evening event also benefitted AID Atlanta. It’s a sleek space with a bar in one half and a dining area in the other that will open up for tea dances on Sunday afternoons. Sean and Gilbert Yeremyan completely remade the space that until late January housed Outwrite Bookstore. And in the buildup to opening 10th & Piedmont, they made their intentions clear: The refashioned 2,500-square-foot space wouldn’t be an expansion of the popular but tiny Mediterranean café but something new that goes late night. 10th & Piedmont officially opens on Monday, throwing open its doors ahead of its across-the-street rival Ten. That space, owned by gay gym owner James Nelson, teased fans with two previews in October. But Nelson hasn’t said when the former 5 Napkin will open permanently.