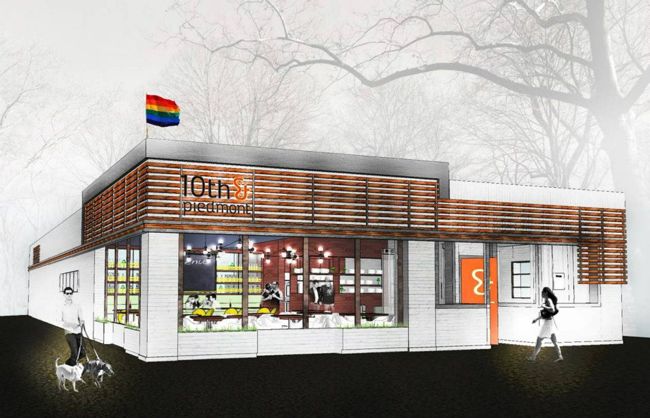 10th & Piedmont? It soon won’t just be the intersection at the heart of Atlanta’s gayborhood but the name of the refashioned 2,500-square-foot space that for years was Outwrite and by December will be a gay-friendly restaurant and lounge expansion of Gilbert’s. The popular but tiny Mediterranean café that sits near Blake’s said in March that it would take over the former Outwrite space, first pitching an expanded lounge and bar area that would rival its gay next door neighbor. Then they pivoted and said the expansion will provide more restaurant space to expand the cozy 1,500-square-foot café. Last week, the restaurant owners posted a handful of renderings of their concept that’s now called 10th & Piedmont and told Midtown Patch the space will help patrons finish off their night. Are they elbowing their way into the Blake's wheelhouse -- the gay nightlife scene -- or simply continuing their mixed and gay-friendly approach that keeps Gilbert’s bustling late into the night? We’ll see.

“We want to create a place that will complete your night,” said Sean Yeremyan. “10th & Piedmont was designed to appeal to our neighbors who want to enjoy dinner with a group, late night drinks, or something in between.” Guests will be able to enter the restaurant and lounge from inside the adjacent restaurant, Gilbert’s Café & Bar, or use the entrance located at the Piedmont intersection. Serving seasonally inspired dishes, creatively portioned into small bites for easy sharing, 10th & Piedmont’s Executive Chef Brett Ring will use multi-cultural flavors and organic ingredients to execute global cuisine with a regional, Southern influence.

Reaction to the renderings of the new space on Facebook – complete with a rainbow flag perched atop the renovated structure and windows that open to both streets – were immediate. And mixed. “Look at that flag! WOOOOO! Can't wait to have a great meal there,” Woody Eadie says. And we said mixed. “Tired design, horizontal slats have been 'done to death,’” says Jason Hall. “Already a dated look....says nothing to the original architecture of the building.”