‘Giant Little Ones’ opens with exploration of queer identity 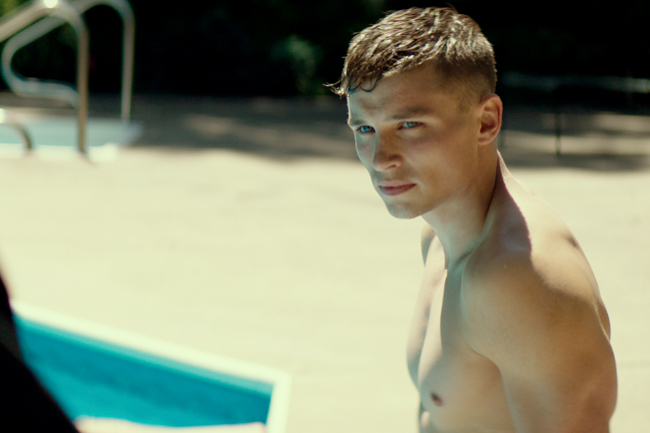 Franky and Ballas are your typical, dreamy, high school students. They’re handsome, big men on campus, best friends since childhood, and popular leaders of the swim team, and they’re about to share an intense sexual experience.

Giant Little Ones chronicles the days leading up to Franky’s 17th birthday blow-out and the events that unfolds after said experience. The film opens in Atlanta on March 22, and the love story is filled with compelling twists and revelations.

Keith Behrman wrote the script and directed the film, and he speaks to Q about flipping the script on the typical gay coming-of-age story.

What made you want to create this film?

Most of my stories are a reflection of my life. I grew up with all of these constraints and models of what I was supposed to be as a man and a human being. I am a person who sees life as all of these offerings.

I wanted to explore the attraction that can occur between people of the same sex. I don't identify as gay, but I grew up feeling those definitions are always very rigid. I decided to have some experiences and, after them, I felt a great sense of relief.

At the time I had the idea about this script, I was in Canada, and there was a string of kids who were killing themselves because they were gay. I didn't want to make a film about that, per se, but I did want to make a film for anyone who has ever felt constrained by the narrow ideas of what and who we are supposed to be.

How did you make some of the creative directing choices that feature so prominently in Giant Little Ones?

We really wanted to capture the energy of youth, the vibrancy of these two young men and the people around them, the sense of connection of love and enthusiasm they had for life and their world. Shooting in the summertime with the trees and lots of grass helped add to that vibrancy and momentum.

After the moment between them, everything kinds of stops. We wanted to show that break in movement. The bicycle is a motif for their relationship, so it was very important to the movement that we showed onscreen.

How can we get people excited about the incredible ending without giving it away?

The ending is the epitome of the whole film. What I really like about the film is that it offers a positive ambiguity. It presents labels and people's need and desire for labels, but it also presents the fact that we don't have to have labels. There is a certain ambiguity for Franky, and he overcomes that. Certain definitions are placed upon him by others, and he overcomes that by embracing that positive ambiguity.

This is anything but your typical gay teen love story, with really heavy topics. How did you approach it?

It was important to have people relate to the characters. We wanted people to see the humanity of all of them. We didn't want them to be one-dimensional. The reactions to the film have been really positive. People have been deeply moved by the story. Lots of teens have said the film changed their lives, and one teen said it saved his life, so that is always so great to hear.

Giant Little Ones opens in Atlanta on March 22 at AMC Phipps Plaza.