Get ‘Under the Influence’ of Jack Kinley’s art 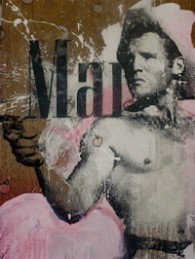 Beginning Thursday at Radial Café, Atlanta gets its chance to reap the rewards of a personal moment about a year ago when local gay artist Jack Kinley decided to be true to himself.

“Under the Influence” is Kinley’s first attempt to create a body of work with the sole goal of exploring himself as an artist.

“Every story I’m trying to tell is pushed through this filter of those things that inspire me to create,” he says. “I identified influences that range from major artists—Robert Rauschenberg, Jasper Johns, Picassso, Warhol—to various pop influences like cartoons, then a lot of it is my own personal history and the relationships that define who I am.

“And consequently, a lot of it has to do with those gay influences in my life,” he says. “In particular, the piece called ‘Forbidden Fruit’ [top photo], is about those things as a child we’re told to stay away from because of their ‘sinful’ nature. It’s sexuality through that American perspective.”

Sounds like pretty heady stuff. But if art is in the eye of the beholder, viewers of “Under the Influence” will first notice Smurfs, sexy cowboys, Disney characters and flowers. And at least at first, the work could come off as wholly light-hearted.

That doesn’t surprise Kinley, and there is definitely an element of humor in his work. But the art itself draws us in to rethink those initial perceptions.

“At first glance, everything looks really light, and partly because I incorporate pop icons with a common thread of innocence and playfulness,” he says. “But beneath it all, the art sort of masks all of that. There’s a grunge element, a gritty underside to all of it.”

Framing the works in rough-hewn wood, incorporating splatter techniques, and sometimes washing traditionally bright images in dark tones, Kinley lets the art take on new, deeper meaning the longer you look at it.

When the works are taken in that context, those grittier elements balance the slick nature of some of the chosen images. The pieces must be absorbed in their entirety to discover how moving they really are.

Good examples of disparate elements working together to create something entirely new in “Under the Influence” are Kinley’s “Donald Duck and Picasso (middle photo) and “You Look Really Good Today” (bottom photo).

“Donald Duck and Picasso” was inspired by a Rauschenberg quote Kinley saw and liked. To paraphrase, “Abstract Expressionists realized it was no longer an either/or situation, rather both/and – Beethoven AND the Beatles, Donald Duck AND Picasso.” 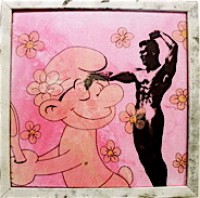 “I like the juxtaposition of like and unlike, because everything is connected,” the artist says. “Good-bad, gay-straight. It all coexists.”

Kinley’s career is a bit of a juxtaposition itself. As a talented graphic designer, his work history moved him to create his own company, Lab Monkey Design, with client work including the logo and page designs for Project Q Atlanta. His commercial portfolio ranges from corporate juggernauts like Home Depot to branding for non-profits like Positive Impact.

But art–more pensive work that puts his visual skill to its true task–was always a part of his life, he says.

“Graphic design was my ‘grown up smart business decision to make money’ when I was in college,” Kinley says. “And I enjoy it, but there are things that can’t be said for a client that as an artist, I need to say.

“I think my graphic design career was a progression to get back to a more creative space, until ultimately I decided I had to make art too, in order to say what I wanted to say, instead of using my creations to lend voice to other people’s perspectives.”

Get to know Kinley through the nine works of “Under the Influence.” The show displays through Dec. 31 at Radial.