Get ready for guns in Atlanta’s gay bars 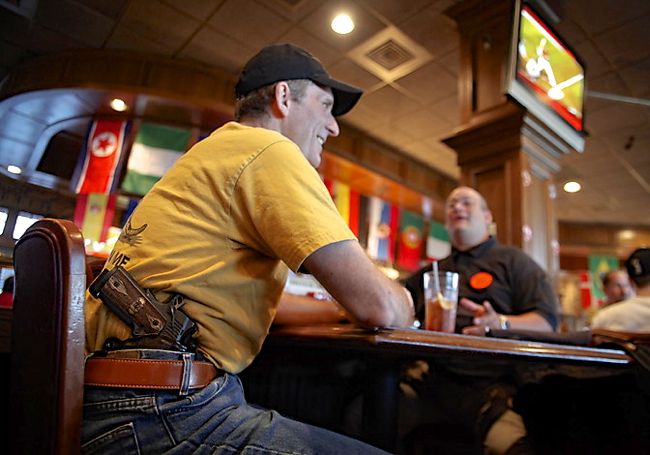 Fighting off cigarette smoke in Atlanta's gay bars is tough enough. But now guns? It's only the governor's signature away from becoming reality. And you just know Gov. Nathan Deal will sign it.

In the closing hours of the Georgia legislature on Thursday, lawmakers succeeded in passing a bill that's failed in years past: Guns most everywhere.

The fate of a sweeping expansion to Georgia’s gun laws, the subject of much debate and consternation over the course of the past two legislative sessions, was decided in the final hour of the 2014 session late Thursday.

House Bill 60 received final passage by a vote of 112-58 and now goes to Gov. Nathan Deal’s desk. The approval came despite national efforts by opponents to defeat what they dubbed the “guns everywhere” bill.

The legislation deleted the prohibition on guns in bars spelled out in current law.

(6) In a bar, unless the owner of the bar permits the carrying of weapons or long guns by license holders;

And it just gets worse.

With passage of the bill you'll also be able to carry weapons in bars now, at least if you have a permit. But again, since no one is allowed to check if you have a permit, everyone can now carry guns in bars, permit or not. Guns and alcohol do make such a lovely mix, don't you think? Combine that with an expansion of the stand-your-ground defense to allow felons to take advantage of it, and we've made real progress in public safety, don't you think?

The state's three openly gay House members – Reps. Karla Drenner, Simone Bell and Keisha Waites – voted against the measure. Just as they did on a similar bill earlier in the legislative session. And last year, too.

All this leaves us wondering: If the Starbucks in Ansley Mall becomes a gay bar, and guns are allowed in bars, will the bears be packing heat at the Starbucks?