Get into it: Keeping up with DJ Vicki Powell 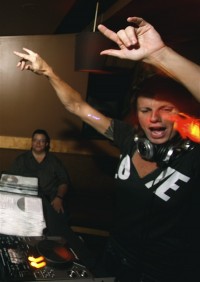 A triple header weekend proves how high the demand remains for DJ Vicki Powell, who throws down her own brand of musical magic at Aurum on Thursday, Bellissima on Friday, and Mixx on Saturday.

Nary a week goes by in the LGBT ATL without a Powell performance, which fans say is always energetic on the dance floor and super friendly in the DJ booth. In short, she’s a natural.

Atlanta native Powell (photo) comes by her love of da beats honestly. She says she grew up “in a home that my mother filled with music.” She got her start DJing at a local roller skating rink at the age of 13.

Known for saying “Get Into It!” and for her own FLUX parties (check out our photos from last week’s event), she is also intrinsically connected to events like the distinctly different vibes she spins this week: Etcetera, Candy Shop and special appearances at Mixx Atlanta.

With an especially busy weekend ahead, we decided to catch up with the turntable master not only for a preview, but also as a get-to-know-you for Atlanta fans old and new. She lets us in on her thoughts about being a female DJ and how she balances “deep and sexy” with “dirty and rebellious.”

Project Q Atlanta: Your sets are a fixture in gay Atlanta. How do you keep it fresh?
DJ Vicki Powell: I am lucky to play a variety of venues and events, so I have the opportunity to showcase many different styles of music.

If you catch me on a Thursday at Aurum, I will be playing ‘80s, indie, electro. If you hear me on a Friday at Bellissima, you’ll hear more Top 40 stuff, and if you hear me on a Saturday at Mixx, my sets tend to be geared more towards the boys, so I like to get a little dirtier than usual. You might hear more vocals, anthems and big room classics, but of course with my own spin!

And at my party, FLUX, anything goes—there are no rules, no format. We just get into it!

How do you describe your style at the tables?
I’m very approachable when I’m at the tables. I love talking with people at my parties. I would say my music is pretty eclectic. I don’t take it too dark; I like to keep it somewhere between deep and sexy, and dirty and rebellious.

Who are your favorite artists, and what kind of music inspires you?
I like everything from the classic house sounds of Danny Tenaglia, Freemasons, Dirty South and TV Rock, all the way over to the edgy electro sounds of Crookers, Diplo, Boys Noize, MSTRKRFT. I love it all!

What’s it like being female in the male dominated world of gay party DJs?
I don’t really think that much about it. I just do my thing. I don’t feel limited by my gender, but I don’t think it’s advantageous either.

I just think it’s about playing the music… and I’ve always kind of felt like one of the boys, anyway.

How do you “read” a crowd, and how do you adjust when you’re playing a live set?
That’s an ancient DJ secret! I could tell ya’, but I’d have to kill ya’.

[I play all kinds of crowds, but] my favorite crowd is the FLUX crowd. I’ve been throwing the FLUX parties for about 3 years now, and we have built a pretty unique bond. It has a house party feel, it’s unpretentious, it’s welcoming, it’s home.

Anything else devoted followers or potential fans should know?
I want to extend a huge “Thank You” to my fans. They are my inspiration, the glue that holds all of this together. Especially my FLUX troopers that have been with me from the beginning: a very special thanks for sticking with me through all of the growth and changes. I love ya!

Everyone be sure to catch me at the next FLUX in April (location TBD). In the meantime… it’s a triple header weekend, so get your dancin’ shoes on!