Transgender employees in Georgia are getting the last laugh. Often pushed to the back of the LGBT equality bus, transgender people now have a trump card dealt by a conservative court — better workplace protections than the gays.

That’s the new reality in the wake of a ruling last month from a three-judge panel of the 11th U.S. Circuit Court of Appeals in Atlanta. The court – conservative in part because of this guy – said that discrimination against a transgender person based on gender-nonconformity is sex discrimination and upheld a lower-court ruling that the firing of transgender employee Vandy Beth Glenn was based on sex discrimination.

The practical impact of the ruling? You can’t fire transgender people for their gender non-conformity or while they are transitioning. And in Georgia, a state with no workplace protections for gay and lesbian employees, it also means that transgender employees enjoy more protections than their gay co-workers.

“It is true that transgender individuals will have a higher level of employment protection than gay and lesbian people,” says Jeff Graham (top photo), Georgia Equality’s executive director. 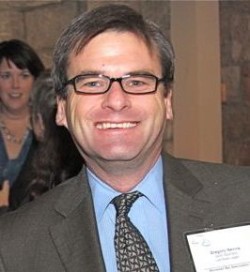 The legislation, known as House Bill 630, was proposed during the Gold Dome session last year; supporters hope it gains a hearing and floor vote in the coming months.

“The purpose of the town hall meeting is to answer any questions people have about how broad of an impact the appeals court ruling is going to have — specifically for transgender individuals who have been discriminated against on the job,” Graham says.

Nevins (bottom photo) says they will also discus what the ruling means for gender non-conforming people who aren’t transgender.

Without other workplace protections in place for gay men and lesbians, it means this: Get fired for being effeminate (gay men) or butch (lesbians). Otherwise, getting canned for being gay is legal.

“The guys at the Eagle wouldn’t fare as well as the guys in a tea room,” Nevins says in explaining the difference between gender conforming employees and those that don’t conform to gender norms.