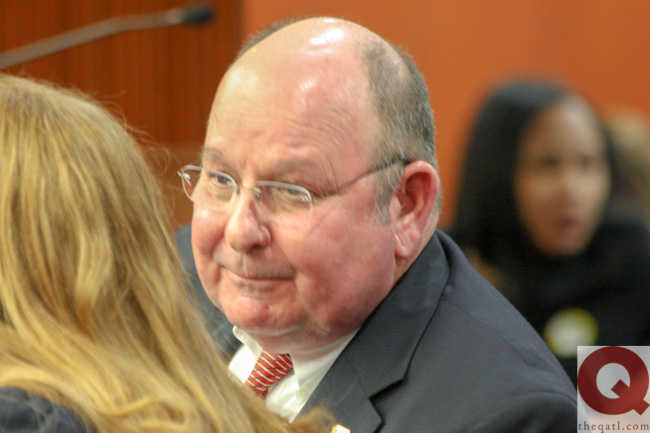 Republican lawmakers vetted their own LGBT-inclusive hate crimes bill on Tuesday, a measure that has the backing of Georgia's top law enforcement officer, prosecutors and progressive activists.

The legislation, House Bill 660 from GOP Rep. Meagan Hanson, has bipartisan support. Religious conservatives, though, vocally opposed the bill during an hour-long hearing before a subcommittee of the House Judiciary Committee at the State Capitol.

Hanson (second photo), who introduced the bill in early January, said Tuesday that it sends a strong message that the state won't tolerate hate crimes and helps combat crimes like this that “occur far too often in our community.”

“While I think it is important to send a message that Georgia rejects such behavior, I also think it is equally important that people who commit these crimes get adequately punished for the severity of their crime,” Hanson said.

Hanson added that the bill does not limit freedom of speech, addressing criticism from religious conservatives who argued the legislation would hamper their ability to speak out against LGBT issues.

“Freedom of speech does not, not has it ever included the freedom to threaten. Hate crimes seek to stifle, limit and enslave others, cowing them to submission so that they might not pursue their rights to freedom of speech, to express their beliefs or to pursue happiness,” Hanson said.

The bill stiffens penalties for misdemeanors, aggravated misdemeanors and felonies if the crimes target victims in the protected classes. The bill also prohibits sentences from being suspended or stayed for felonies, and eliminates earned time for misdemeanors. People convicted of hate crimes under this legislation could also be held civilly liable for any injuries or property damage they cause.

Vernon Keenan (top photo), director of the Georgia Bureau of Investigation, said he supports the legislation and has backed other hate crimes bills in the past based on what he's seen during his 45 years with the state's top law enforcement agency.

Hanson's bill also has the support of Pete Skandalakis, a longtime district attorney who is now executive director of the Prosecuting Attorneys Council of Georgia; the Georgia Association of Chiefs of Police; and Fani Willis, a former deputy district attorney. In 2016, Willis prosecuted the case of a man convicted of pouring boiling water on two gay men in a “violent, hateful, premeditated attack.”

But the bill's Republican pedigree and support from law enforcement wasn't enough for religious conservatives, who vocally opposed the bill during Tuesday's hearing. They argued the legislation favors certain classes of crime victims over others.

“I’m not sure why someone who belongs to a protected class, their fear is any more special than the fear of a child whose mom is being beat up or is getting beat up themselves or getting hurt in some way,” said Virginia Galloway, regional field director for the Duluth-based Faith & Freedom Coalition.

“I think family members are just as worthy of protection as anyone else. I just think that everyone should be treated equally,” she added.

Mike Griffin, a lobbyist for the Georgia Baptist Mission Board, called the legislation “troubling.”

“We do find it troubling, for example, when terms such as sexual orientation or gender identity become a higher standard of prosecution for certain crimes. Such classifications do not treat all individuals equally. It sends a message that some people are more valuable than others and that such crimes against them ought to carry heavier penalties. This type of bill does not treat everyone equally before the law,” Griffin said.

Galloway and Griffin were joined by Paul Smith, founder of the anti-LGBT Citizen Impact; Dave Baker, executive director of the Faith & Freedom Coalition of Georgia; and Tanya Ditty, state director of Concerned Women for America.

Willis, who is running for a Fulton Superior Court judgeship, said the legislation punishes criminals for their actions, addressing critics who argued the legislation creates “thought police.”

Willis said the legislation and its enhanced penalties would send a strong message.

“It is disgusting and Georgia needs to join the other 45 states and send a clear message that we are a progressive state and we don't tolerate this kind of conduct,” she said.

Hanson's bill has bipartisan support. Republican sponsors include Rep. Wendell Willard, the influential chair of the House Judiciary Committee, and Rep. Richard Smith. Reps. Calvin Smyre, Karla Drenner and Karen Bennett – all Democrats – are also sponsors. Drenner is one of four openly LGBTQ House lawmakers and Bennett has authored her own hate crimes legislation, House Bill 663. Critics blasted the measure during a hearing on Monday.

A third hate crimes bill – Senate Bill 316, which is a companion bill to Bennett’s – was introduced in early January.

The subcommittee did not vote on Hanson's bill, likely a next step in the legislative process before the full Judiciary Committee considers it. But subcommittee chair Rep. Ed Setzler said it's likely to face a second hearing before his panel votes on it.