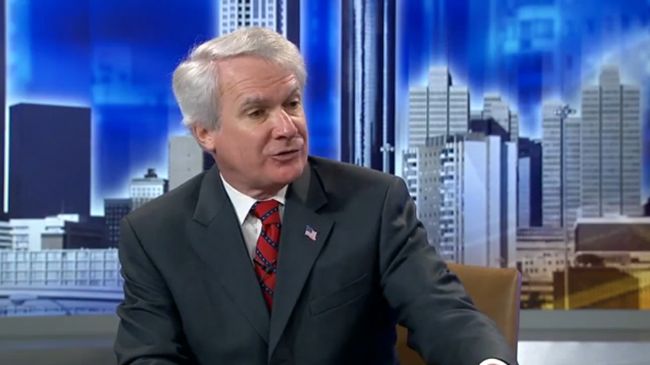 Georgia's anti-gay haters continue to crawl out from under their rocks of intolerance to trip over one another in rejecting the Supreme Court's decisions to drop DOMA and Prop 8. One even hopes to ignite a cultural war over gay marriage.

Georgia's Attorney General, Sam Olens, beat them to the punch, issuing this statement just hours after the Court handed down its decisions on June 26.

“Today, the Supreme Court of the United States held 5-4 that Congress violated equal protection when it defined marriage for federal purposes differently from the way the State of New York defined it. I disagree with the Court’s decision. But it is important to understand what the decision does and does not mean.

“Today’s decision rests on the basic assumption – with which I strongly agree – that the power to define marriage is a power traditionally reserved to the States. The decision does not affect existing state definitions of marriage; in fact, it explicitly says that it is limited to marriages recognized by states as lawful. I agree with the Chief Justice that this limitation means what it says. The definition of marriage adopted by Georgia’s voters is unaffected by today’s decision.”

Party pooper. Turns out, Olens was just warming up the state's conservative camp. Gov. Nathan Deal, a homophobe who can't even say homophobia, followed up with this.

“Our state has been one of those that has recognized traditional marriage — or the definition of marriage — as between a man and a woman,” Deal said.

Tanya Ditty, quiet since she hated on gays with outdated rhetoric (and hair) last year, spoke up with this.

“I believe personally that the Bible does not condone homosexuality,” said Tanya Ditty, director of Concerned Women for America of Georgia. “It does not mean we hate. We love the sinner but do not love the sin.”

“Today’s unfortunate decision by the U.S. Supreme Court striking down part of the Defense of Marriage Act is extremely disappointing.  The Catholic Church promotes and defends marriage by teaching about marriage’s authentic meaning as a lifelong, exclusive, and fruitful communion of one man and one woman.”

Gregory went on to say as a result of the ruling the future of marriage and the well-being of our society hang in the balance.

Over at Roswell Street Baptist Church in Marietta, the Rev. Ernest Easley was troubled by the decision, and he said he planned to talk about it during his Sunday sermon. The church will celebrate July 4th on Sunday, with a congregation of about 1,000 people singing “God Bless America.”

“Why should He (bless us)?” Easley said, asserting that these court decisions run afoul of Bible teachings. “We’ve openly defied Him … I have great fear for the future of our country.”

Ray Newman, an ethics and public policy spokesperson for the Georgia Baptist Convention, is sad. So sad about the gay marriage.

“We believe in the biblical definition of marriage and we believe this goes away from that.”

Gary Marx, executive director of the Duluth-based Faith & Freedom Coalition said the Supreme Court shouldn't define marriage (they didn't) and that voters should decide the issue in states (they did, especially in Georgia).

“Ultimately, we want these important decisions to be left up to the peoples’ branch and debated by those who are representatives of the people in Congress, or their executives, or given directly to them to vote on like many states have done.”

And then there's Phil Kent and Dick Williams, the one-two conservative punch on “The Georgia Gang,” Fox 5's attempt at a Sunday public policy and politics roundtable. Williams moderates while Kent rambles, slings insults and rambles some more. So of course the pair had plenty to say on the first show after the high court decisions. Better Georgia, the progressive watchdog group headed by the gay guy conservatives love to hate, called them out after issuing the video clip above.

Give Williams some credit. He tried to couch his contempt for gay marriage in a solution, even if it falls shy of equality.

“Let the homosexual couples form an S Corp. Set it up as a business partnership. And don't use the word marriage. This is so simple because marriage is between a man and a woman.”

Kent also compared supporters of gay marriage to Pagans. Yes, he did. And consider Deal appointed Kent to a state board, just like this other anti-gay pundit, Dick Yarbrough.

When Dickerson offered some background on the case behind the court's DOMA decision to highlight the struggles of LGBT couples, Kent dismissed it.

“It's an insult to equate that with a traditional marriage. You can have a civil union and take care of all of these sob stories.”

But Kent's not done. Culture war!

“It's a sad day in America because this does dynamite the foundations of our Judeo-Christian system.” …

“It's going to be a cultural war in Georgia and every other state to try to undo this wrong.”

It's little wonder, then, that gay polling expert Nate Silver predicts that Georgia will be one of just six states still opposed to gay marriage. In 2020.