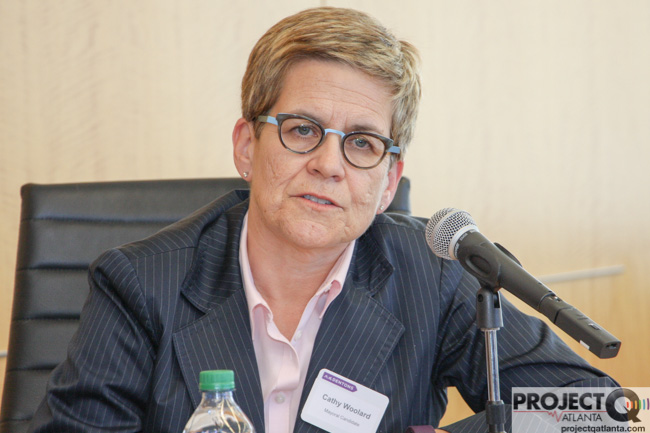 Woolard (photo) appears to be the only LGBTQ official among the Democratic electors, which include U.S. Rep.-elect Nikema Williams, former gubernatorial candidate Stacey Abrams and Savannah Mayor Van Johnson, according to the AJC. Williams, the party chair who will succeed Rep. John Lewis in Congress, asked Woolard to be an elector.

Woolard is a former Atlanta City Council president, and she was the first LGBTQ elected official in Georgia. Her selection is both a reflection of her political experience and the continued commitment to LGBTQ equality efforts by the Democratic Party of Georgia, she said.

Woolard and the other 15 electors will gather in person on Dec. 14 to cast ballots for Biden. The former vice president has a 14,000-vote lead over President Donald Trump in Georgia. Despite a statewide recount, Woolard said Biden will still win Georgia.

“Things in Georgia will clearly be resolved on behalf of Biden once the Republican leaders here in the state decide to sit down and accept the will of voters,” she said.

Woolard was also a delegate to the Democratic National Convention in 2000 and has been an influential player in metro Atlanta politics for decades. She started advocating for LGBTQ issues in the 1980s. In recent years, she lobbied for LGBTQ equality at the State Capitol.

But even as the electors case their ballots for Biden next month, Woolard cautioned that LGBTQ voters need to stay tuned. Georgia’s two U.S. Senate seats are up for grabs in runoffs on Jan. 5, and the contests pit LGBTQ challengers against incumbents with anti-LGBTQ records.

“It is completely on Georgia. I think the country has finally recognized that. It took a long time and a lot of work to convince people. Our community in particular really needs to do their part,” Woolard said.

If Jon Ossoff and Rev. Raphael Warnock win their races, Democrats will control the U.S. Senate. That would improve the prospects of legislation critical to LGBTQ people, she added.

“There are so many issues for our community that are important, not the least of which is comprehensive civil rights, which is best achieved through Congress. There are so many other things that matter to us – healthcare, battling the pandemic, economic security – that are things that everyone in our country needs. There is simply nothing more important for people to be doing,” Woolard said.

Absentee ballots for the Jan. 5 runoff can be requested online.