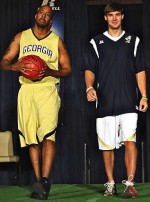 Jocks from the athletic teams of Georgia Tech worked the runway on Tuesday, showing off the school’s new uniforms and a fat $20 million contract with Atlanta-based Russell Athletic. Who said there’s not money in college athletics?

The deal is for 10 years and could be worth more than $20 million. The previous contract was for five years and $3 million. In addition, Tech will serve as a laboratory for new styles, designs and materials for Russell.

But this new deal goes way beyond apparel. It is in step with the exploding value of apparel sponsorships in college athletics, such as the new 10-year, $46 million deal between UConn and Nike.

Image matters more now, and selling stuff with a logo spreads the word.

The Atlanta Journal-Constitution coverage includes a photo gallery of the new unis.