Georgia store tells ‘fags’ to pull up their pants 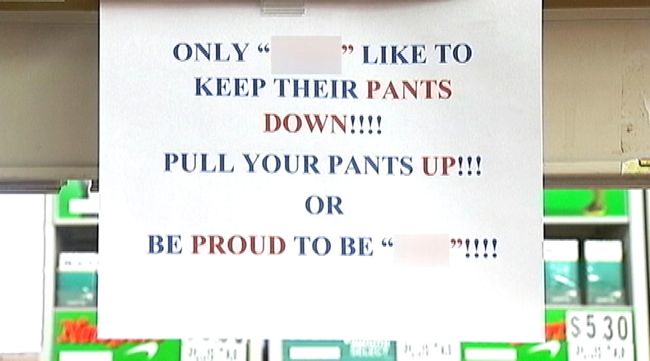 A business owner in LaGrange posted signs in his southwest Georgia convenience store warning customers with baggy pants that they look like "fags" and he won't serve them.

The owner said he put up the signs because he was sick of customers coming in with saggy pants. They call customers a gay slur if they choose to wear saggy pants.

“I came up with that sign, nobody else did,” said Anil Patel, who owns PCA Food Store on Hogansville Road. “Since that sign went up there, I don’t see no pants down in my store, because they read the sign and they decide what they want to be.”

WSB blurred the slur in their video and reporter Rachel Stockman didn't say it. But it's likely that the slur is "fags," based on the sign and descriptions from customers in Stockman's report.

When confronted by WSB, the store owner dug in and said he plans to use his anti-gay quip on a bumper sticker. Which prompted a shrug of disbelief from WSB anchor Justin Farmer at the end of WSB's report.

But lesbian Kerrie Williams, a clerk at the store, says she's not bothered by the sign.