The runoffs come Jan. 5 with the eyes of the nation focused on Georgia, as the races will determine control of the U.S. Senate. LGBTQ advocates are already urging people to tune into the runoffs and make sure they vote.

“I hope that folks will be prepared to do the hard work over the next nine weeks to pull off history two more times,” Jeff Graham, executive director of Georgia Equality, said Friday during a Q Conversations live event.

Fred Smith, an LGBTQ advocate and an associate professor at Emory University School of Law, said electing Ossoff and Warnock and giving Democrats control the U.S. Senate would determine the fate of the Equality Act and judicial and Cabinet appointments by President-elect Joe Biden.

“Soon to be President Biden, his hands would be absolutely tied across the board on virtually every issue, including LGBTQ issues,” Smith said during the Q Conversations event. “And so Georgia, we did it once. It’s time to do it again. It’s time to text. It’s time to call. It’s time to, if you’re in a position to do so, it’s time to raise money.”

After Election Day stretched into Election Week, Smith said it’s OK for weary LGBTQ voters to take a breath to celebrate Biden’s historic win. But then it’s time to get to work supporting Ossoff and Warnock.

“It’s time to say January 5 every chance you get. Every time someone says, ‘Oh, sure. We won, we won Georgia’ – January 5. We did this, that’s great. We could celebrate a little bit, I suppose. But in the very next breath should be January 5, that we should be working to elect a Sen. Ossoff and a Sen. Warnock, who will be champions for our cause, and more broadly, will be able to move help move the country forward, rather than face colossal obstruction,” Smith said.

Ossoff and Warnock strongly back LGBTQ equality. Ossoff publicly embraced LGBTQ issues during his 2017 run for Congress and renewed his pledge of “unwavering” LGBTQ support in his Senate run this year. In his race, Warnock did the same. The Human Rights Campaign endorsed Ossoff in July and Warnock in September.

Ossoff said his commitment to LGBTQ Georgians comes from “a deeply rooted belief in the equality of all people and commitment to expanding human rights and to ensuring that everyone … is treated with the compassion and dignity and respect that they deserve.”

“There’s no place for discrimination on the basis of sexual orientation or gender identity,” Ossoff said during a Q Conversations in September. “Those should not be merely a matter of principle, but a matter of law.”

In October, Warnock said he’s been an LGBTQ advocate for years and would fight “mealy-mouthed” foes of LGBTQ equality in the U.S. Senate.

“I have been a strong ally of the LGBTQ community in Atlanta both inside and outside of my church,” Warnock said during an interview with Project Q Atlanta. “When President Obama came out in support for marriage equality in 2012, I celebrated from the pulpit because as a pro-LGBTQ+ pastor I believe supporting all people, and especially marginalized communities, is a responsibility of all people and especially those in the church.”

“I’ve also worked to help reduce the stigma around things such as the HIV epidemic through my work and called on my fellow faith leaders to affirm the humanity and equality of people that identify as LGBTQ+ because what affects one of us, affects us all. How we treat the marginalized is the acid test of our faith,” he added.

Perdue voted to confirm an anti-LGBTQ judge to the 11th U.S. Circuit Court of Appeals in Atlanta in 2018, and then – with Loeffler – confirmed a second anti-LGBTQ judge to the appeals court earlier this year. Loeffler targeted transgender people in a bill she filed in September and supports anti-LGBTQ “religious freedom” legislation. Perdue also supports “religious freedom” legislation, won’t back the Equality Act, and he received a zero score from HRC. 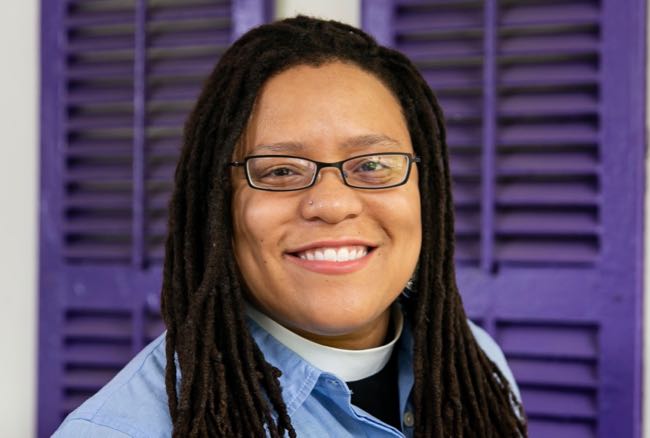 HRC said Loeffler and Perdue will continue to work against protections for LGBTQ people.

“We need pro-equality champions like Jon Ossoff and Rev. Raphael Warnock to help usher in a pro-equality majority in the U.S. Senate,” HRC President Alphonso David said in a press release. “David Perdue and Kelly Loeffler are anti-LGBTQ extremists who will undermine the rights and well-being for all LGBTQ people.”

But Ossoff and Warnock stare down a daunting challenge in their runoffs: Republicans have won every runoff in Georgia since 1992.

That’s why Rev. Kim Jackson (photo) – who made history Tuesday as she became the first LGBTQ person elected to the Georgia Senate – said it’s critical for LGBTQ people to support Ossoff and Warnock and vote in the Jan. 5 runoffs.

“The work that we’ve got to do is to make sure people cast those ballots. It’s just essential,” Jackson said during the Q Conversations event on Friday.