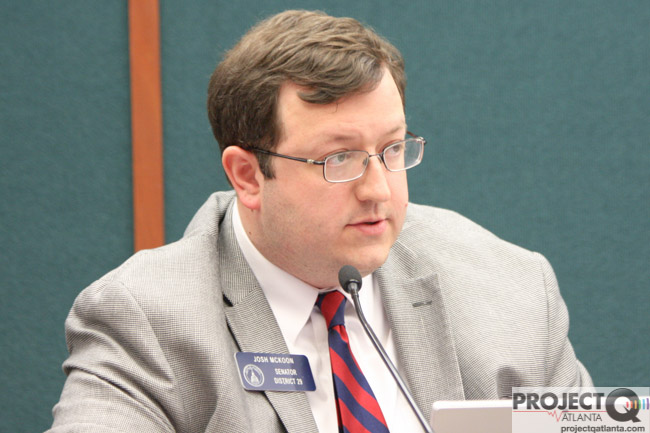 Two Republican senators made a last-ditch effort to push through an anti-LGBT “religious freedom” bill late Tuesday, another in a string of legislative tricks to try and get the measure passed.

Sen. Josh McKoon (photo), a Republican from Columbus and the face of “religious freedom” legislation for several years, made it clear early Tuesday that he wasn’t done trying. Via the Georgia Voice:

“I think what people will remember, is they will remember that the Republican party, the party founded largely on an ideology of abolition of slavery, by people who yes, brought their religious values in to the public square, has been completely and totally unwilling to hear the cry of these people and to lend them a basic protection of a fundamental human right,” McKoon said, referencing a Muslim Georgia student who went to federal court because of her choice to wear hijab.

McKoon was lobbying for Senate Bill 233, a “religious freedom” measure from Sen. Marty Harbin introduced in late February despite GOP leadership ­making it clear they wanted nothing to do with the controversial legislation this session.

Harbin said earlier in March that he would try and attach his bill to any legislation he could in the closing days of the session.

So late Tuesday – sometime after 11 p.m. – McKoon and Harbin maneuvered to add a “religious freedom” clause to an unrelated bill. It sets up a showdown for Thursday, the last day of the legislative session. Via the AJC:

No vote was taken on the proposal, which came after 11 p.m. But the move sets up a showdown Thursday, the last day of the legislative session, should the chamber decided to take up the issue before they adjourn for the year.

The original legislation, House Bill 257, involves a mandate for local municipalities to register with the state Department of Community Affairs in order to receive state grants. But the amendment as proposed by state Sen. Marty Harbin, R-Tyrone, would also require local authorities to follow a mandate set by the federal Religious Freedom Restoration Act “regarding government burdens on the free exercise of religion,” according to the proposal.

McKoon isn’t shy about using last-minute legislative tricks to pursue his anti-LGBT agenda. On the last day of the 2016 session, McKoon and other lawmakers hijacked a bill and tried to retaliate against companies that opposed “religious freedom” legislation. 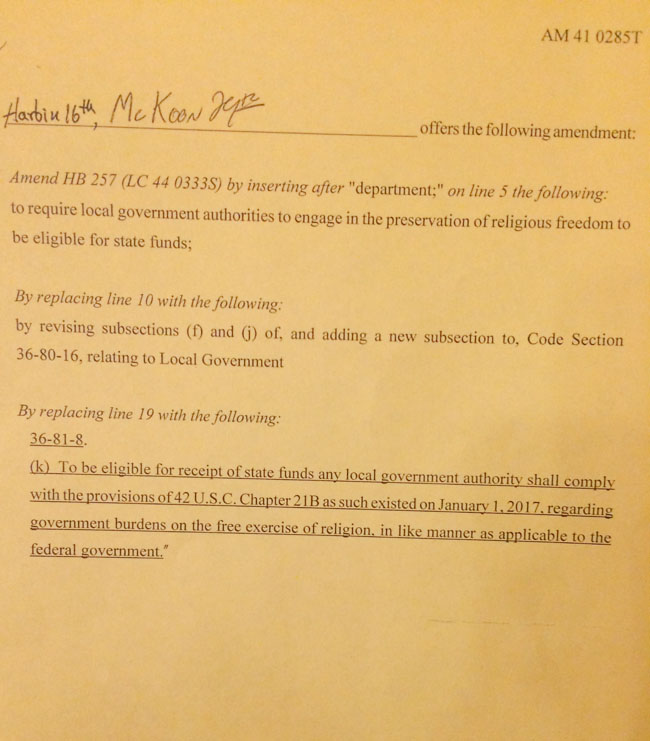