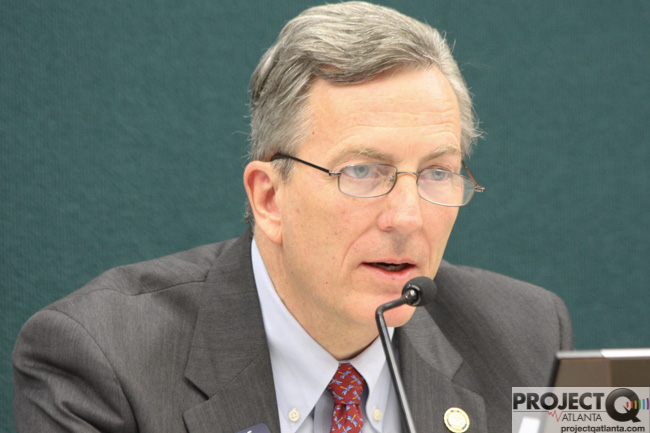 After weeks of deafening public calls to pass a hate crimes bill and hours of behind-the-scenes negotiations on Thursday, the Senate Judiciary Committee held a hearing on the measure – then adjourned without taking any further action.

“This is not a criminalization of thought or speech. What this is is allowing the state to properly classify particularly heinous offenses, and passage of House Bill 426 will make it clear there is no place for hate in Georgia,” Rep. Chuck Efstration, the Republican sponsor of the bill, said during the hour-long hearing on Thursday.

The hearing was the first action taken on the bill by the Senate Judiciary Committee since it passed the House in March 2019. The committee and its chair – Sen. Jesse Stone (top photo), the Republican who killed the measure last year – has stubbornly refused to consider the bill.

That refusal continued late Thursday, despite more than a dozen speakers – from prosecutors to religious leaders, progressive activists and a Republican former state attorney general – calling for the committee to approve the bill and send it to the full Senate for a vote.

“Passing LGBTQ inclusive hate crimes legislation is an important step in the right direction in terms of protecting all Georgians from violence and ensuring that our state’s reputation as a good place to visit, live and do business remains intact,” said Jeff Graham, executive director of Georgia Equality.

Georgia is one of just four states in the U.S. without a hate crimes bill. In 40 states, the legislation provides a sentence enhancement for bias crimes – similar to H.B. 426 – and in six others, hate crime offenses are treated as an additional crime, according to former Georgia Attorney General Sam Olens.

By including gender, Efstration’s hate crimes bill would offer protections for transgender people – a class of people that is disproportionately the victims of crime, Olens told the committee.

“It is really important for folks to feel protected in their community and I would suggest to you probably no community feels less protected than the transgender community,” Olens added.

Efstration’s bill has gained renewed attention since the killing of Ahmaud Arbery near Brunswick on Feb. 23. Ongoing protests in Atlanta for racial justice and equality, ignited by the death of George Floyd at the hands of Minneapolis police on May 25 and the killing of Rayshard Brooks by police at an Atlanta Wendy’s on June 12, have also included support for the bill. Participants in a June 7 march through Midtown to support black transgender people called for passage of the legislation.

The push for the bill to become law has also come from many of the biggest brands and largest businesses in Georgia, state lawmakers and the powerful speaker of the Georgia House, and scores of municipalities, including Atlanta, Cobb County, Doraville, Marietta and Stockbridge.

“Hate harms all people of all colors, political persuasions and ages. This is not a partisan issue, it is a human one. The undersigned are members of both parties, united in a belief we can do better,” the letter stated. “We urge the passage of the bill so Georgia will leave the minority of five states which does not have a hate crimes law, and joins the great majority of states which have taken a stand against hate.”

On Wednesday, Lt. Gov. Geoff Duncan unveiled his own hate crimes proposal that’s quite different from H.B. 426. The bill would make a hate crime a stand-alone criminal charge, and the proposal does not include gender among a list of protected classes. The bill also adds several protected classes – including culture and people exercising religious beliefs or their First Amendment rights.

The legislation also mandates that law enforcement agencies track hate crimes and report them to the GBI, which is not included in H.B. 426. In addition, Duncan’s bill proposes that incident reports include hate crimes in which there is no arrest would not be subject to the state’s Open Records Act. That means reports of those incidents would not have to be made public.

Duncan’s bill has been widely panned by advocates of hate crimes legislation who are concerned it will delay passage of any measure. If Duncan’s bill passed the Senate – or senators make changes to the House bill – the measure would face another House vote. With just a few days remaining in the state legislative session, the delay could kill the measure.

Graham and other supporters who testified during the committee hearing on Thursday applauded Duncan’s bill for including hate crimes tracking. But they said lawmakers should push ahead with H.B. 426.

“We can come back and tweak that language in 2021. To delay this entire bill from becoming a law for another year does a disservice to people that are suffering today and the people who will suffer over the next year,” Graham said.

“Crimes of hate or bias are uniquely important, socially devastating and warrant enhanced public attention and action. What distinguishes a bias or a hate crime from others is not the act itself but the animus that propels its commission,” Drenner, a co-sponsor of H.B. 426, said during the press conference.

Cannon, who said she was the victim of a hate crime in college, criticized Duncan’s bill for allowing hate crime without an arrest to be hidden from the public.

“For the inclusion of survivors of hate crimes and bias-motivated incidents, we desperately need for the public to be able to view who is committing these crimes, whether or not an arrest is made,” Cannon said.