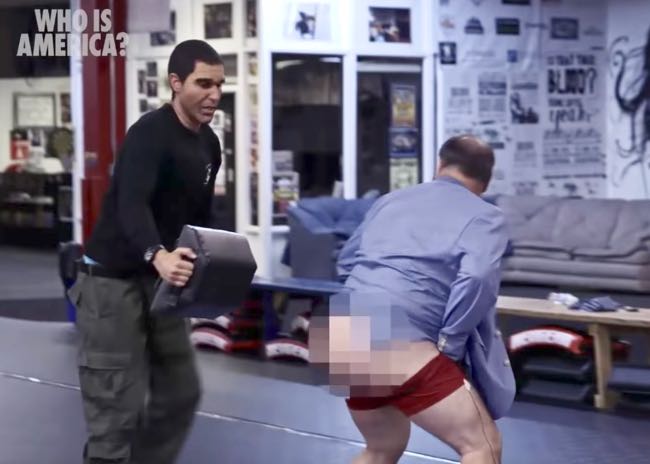 Georgia state Rep. Jason Spencer bared his buttocks and chased Sacha Baron Cohen around a room yelling “I'll make you a homosexual” during a racist and offensive segment on Cohen's new show.

The prank – which aired Sunday during a new episode of “Who is America” on Showtime – ignited national outrage and calls for Spencer to resign. The four-term state lawmaker also repeatedly screamed a racial slur and mocked Chinese tourists.

During the segment, Cohen – in disguise as Israeli security expert Col. Erran Morad – told Spencer that terrorists are scared of being seen as gay.

“If your buttocks touches them, it means they become a…,” Cohen said.

On Monday, Georgia Log Cabin Republicans called on Spencer to immediately resign due to his “hateful racist actions.”

“There is no excuse for this type of behavior and he does not represent the values of Georgians,” the statement said.

Spencer, a Republican from Camden County, has so far refused calls to resign. The anti-LGBTQ lawmaker – he voted for a sweeping anti-gay “religious freedom” bill in 2016 – lost his re-election bid in a GOP primary in May and will leave office later this year.

Some of the biggest names in Georgia politics are also calling for Spencer’s resignation, including House Speaker David Ralston. He called the lawmaker’s actions “reprehensible.”

“Representative Spencer has disgraced himself and should resign immediately,” Ralston said. “Georgia is better than this.”

Gov. Nathan Deal called Spencer’s language “appalling and offensive” and said he was “saddened and disgusted” by it.

Both lawmakers vying for the GOP nomination for governor criticized Spencer as well.

“Rep. Spencer’s behavior embarrasses the state of Georgia, dehumanizes many proud Georgians and offends any sense of decency,” Lt. Gov. Casey Cagle said in a statement. “Even though his constituents wisely defeated him at the ballot box in the May primary, his term runs through the end of this year. He has no business drawing a paycheck from taxpayers for one more day. He must resign immediately or face expulsion from the House by his colleagues.”

Secretary of State Brian Kemp stopped short of calling for Spencer’s resignation, instead calling it “shameful” and saying he should issue a public apology. Kemp also removed Spencer from his campaign’s endorsement list ahead of Tuesday’s runoff election.

“It is difficult to distinguish between Representative Jason Spencer’s bigotry and stupidity,” Porter said. “In this era of Trump, Republicans are too comfortable using the cover of being politically incorrect to excuse and enable inflammatory behaviors and remarks that dehumanize people who do not fit into their narrow worldview.

“Spencer is an example of the toxic brand of politics that hurts Georgia businesses and damages our national reputation. The work conducted under Georgia’s Gold Dome is meant to make the lives of all Georgians better. Spencer’s bold display of hatred and ignorance proves that he is unfit to serve as a leader of this state,” Porter added. “Rep. Jason Spencer has put a blemish on our state that even Ajax cannot remove. He should resign immediately.”

Spencer refused to resign. Per the AJC:

In a statement Monday, Spencer said he was “distracted by my fears” and apologized for the “ridiculously ugly episode” but he refused to step down from office. He said he was told the techniques would help him deter “what I believed was an inevitable attack.”

“Sacha Baron Cohen and his associates took advantage of my paralyzing fear that my family would be attacked,” he said.

Spencer tried to scare Cohen and Showtime from airing the footage, according to the AJC:

“It is clear the makers of this film intended to deceive me in an attempt to undermine the American conservative political movement,” he said, adding he will take legal action if “any of this fraudulently obtained footage of me is used by these Hollywood liberals to line their own pockets.”

This isn’t the first time Spencer has faced calls for his resignation. It happened last year when he warned a black former state legislator that she “won’t be met with torches but something a lot more definitive” if she continued calling for the removal of Confederate statues in Georgia.

He also proposed a bill that would bar women from wearing burqas on public property. It went nowhere.

View the full segment below: