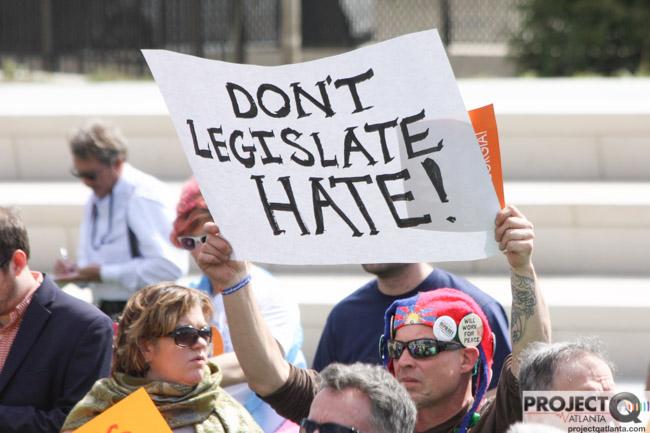 The state-by-state report for 2020 looks at statewide policies, or lack thereof, that affect LGBTQ residents. HRC ranks states on a laundry list from pro-LGBTQ protections to laws against practices harmful to LGBTQ people.

For the first time, Georgia received a mark in its favor on the SEI report. The state’s new hate crimes law – the first state law ever to specifically include LGBTQ people – garnered note from HRC, but only half a checkmark. The report interpreted the law as not including gender identity in its protections.

Georgia lawmakers and legal experts said the inclusion of “gender” and “sex” in the hate crime bill would cover transgender people. That came just a week after a U.S. Supreme Court ruling helped define terms relating to sexual orientation and gender identity.

Project Q Atlanta inquired with HRC about changing the hate crime score in light of the law’s inclusion of “gender” and “sex” as protected categories. HRC stood by its rating, pointing to its press release at the time of Georgia’s hate crimes passage. It said that HRC expects interpretation of the law to follow the SCOTUS ruling.

“The best way to ensure that they will be treated as a priority is to ensure they’re explicitly reflected in the statutory language… (that) protections are inclusive of and inseparable from protections on the basis of ‘gender identity,'” the HRC release stated.

Just like last year’s report – and the year before that – Georgia still falls into HRC’s lowest ranking – “High Priority to Achieve Basic Equality” – with 25 other states.

“The 2020 legislative session was one of the most unusual in recent memory, given the COVID-19 pandemic,” Human Rights Campaign President Alphonso David said in a prepared statement about the SEI report.

“However, despite the shortened sessions in many states, we saw multiple states pass pro-equality laws to protect the LGBTQ community. Although there were anti-LGBTQ laws passed, we also saw great progress,” he added.

Georgia also ranks low for not banning conversion therapy or trans discrimination in health insurance. In addition, the state makes it difficult for transgender people to change gender markers on drivers’ licenses and other documents.

The 2021 state legislative session opened on Jan. 11, and several of HRC’s items are on Georgia Equality’s priority list for the year. Likewise, Georgia’s LGBTQ lawmakers set 2021 priorities that include pro-equality bills. State Rep. Matthew Wilson’s bill to ban conversion therapy in the state returns and equality advocates hope to introduce a bill to decriminalize HIV and a statewide civil rights bill.

LGBTQ and allied lawmakers in Georgia also must play a lot of defense. In 2020, they blasted a lawmaker’s “hateful” ant-trans rant and criticized a “free speech” bill for discriminating against LGBTQ students. They also opposed efforts to allow adoption and foster care agencies to refuse to serve LGBTQ people.

While Georgia inches its way closer to equality for LGBTQ residents, an increasing number of municipalities take up the slack. In 2020, the city of Atlanta ranked “perfect” for the eighth straight year on HRC’s Municipal Equality Index, and Fulton County passed its own inclusive hate crimes measure.