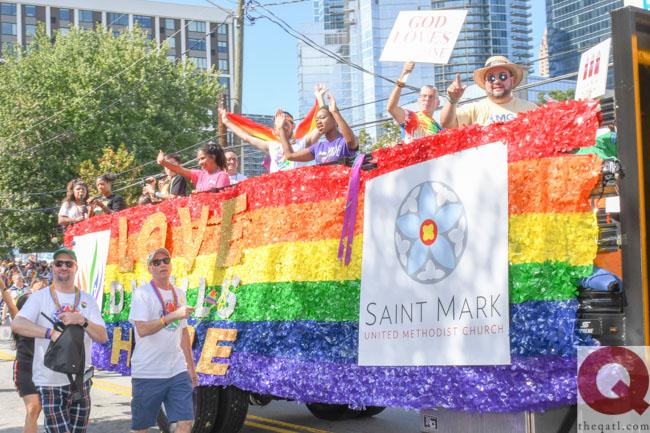 LGBTQ and allied Methodists across Georgia vowed to keep fighting after the United Methodist Church reaffirmed its opposition to same-sex marriage and the ordination of LGBTQ clergy.

The contentious vote took place at an international UMC conference in St. Louis, Mo., on Tuesday.

“It’s very disappointing. It’s heartbreaking. I’m angry,” he said. “But at the same time, I feel oddly energized and even affirmed because of all the phone calls and social media messages. A lot of the LGBTQ folks in the Methodist Church community have really come together.”

Noblitt said the church is planning a “big worship service” for Sunday to discuss the vote.

“This conversation is not over. That is far from the case. There’s a lot more steps ahead as far as how this gets implemented,” he said.

Three plans were under consideration at the conference: allow individual clergy and churches to decide whether to allow gay clergy and same-sex marriages, create three national conferences within the faith that each have separate views, or keep the current stance and strengthen the accountability process. That third plan – the Traditional Plan – was approved by a vote of 438-384. In part, the plan closes loopholes around enforcement of the church's prohibition of same-sex weddings and ordination of “self-avowed practicing homosexuals.”

Emory University President Claire Sterk voiced her displeasure about the vote in an email sent to the Emory community Tuesday night. Emory was founded by the Methodist Episcopal Church and maintains strong ties to the church.

“We respect the dignity and value of all human beings regardless of age, ethnicity, religion, national origin, gender, gender identity/expression or sexual orientation,” she wrote. “I passionately disagree with the vote taken today. As a woman, as an educator, and as the leader of one of the world’s great academic institutions, I cannot be silent on issues of equality and inclusion.”

“Respect and equal opportunity are fundamental to who we are. I ask that together we stand behind all people seeking to better their lives along with those who speak out for equal rights for everyone in our society at large,” she added.

Rev. Tim Bagwell, pastor at Centenary UMC in Macon, called the outcome “deeply painful” but said his church will stay with the UMC until at least 2020, according to the AJC.

“I am deeply sad,” he said. “The Methodist church has always been mainstream, reaching out to people. This sends a different tone … one of exclusion, not inclusion.”

Rev. Kristin Heiden, lead pastor at East Cobb United Methodist Church, told the Marietta Daily Journal that she is an LGBTQ rights supporter and that individual churches should be allowed to decide the matter.

“This is the church I grew up in and the church that raised me, that ordained me, and that now I have the privilege to serve. I continue to pray that we’ll find a way forward, that we’ll find a way to continue to love and share in a mission together that reaches all people,” she said, adding, “It’s hard to watch a church that you love so much and that you’ve seen so many great things come from not be able to come together.”

Some Georgia pastors supported the decision to reaffirm the church’s opposition to LGBTQ clergy and marriage equality. Rev. Scott Hagan of Bonaire UMC said that allowing individual churches to decide the matter would send a mixed message.

“To have each church — possibly in the same town — offering a different perspective and practice would surely be confusing to the public that comes to the church looking for guidance,” Hagan said.

Rev. Randy Mickler, a retired pastor emeritus of Mount Bethel UMC in Marietta, told the AJC before the vote that he is against marriage equality.

“I think the Word of God should be honored by the church, if the church is going to be a true church.”

The United Methodist Church is the nation’s second-largest Protestant denomination. It has 12.6 million members worldwide, with 7 million in the U.S., according to the church.