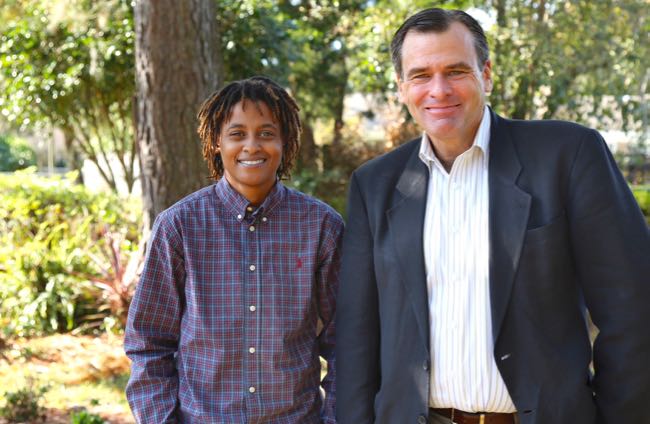 Attorneys for a Georgia lesbian fired for being gay criticized an appeals court ruling against her as a “decision from the Stone Age” and asked the full court to hear their claims that federal law bans discrimination based on sexual orientation.

The criticism from Lambda Legal came Friday as the LGBT legal non-profit petitioned the Atlanta-based 11th Circuit U.S. Court of Appeals to rehear the case of Jameka Evans (photo left). She was fired from her job as a security guard at Georgia Regional Hospital in Savannah in 2013 and sued in 2015.

Last month, a three-judge panel of the appeals court rejected her case and agreed with a lower court ruling that claims of discrimination based on sexual orientation do not violate existing federal laws against gender bias.

On Friday, Lambda Legal urged the full court to hear the case.

“If it seems the court’s decision is from the Stone Age, that’s because, from an LGBT perspective, it is,” Greg Nevins (photo right), Employment Fairness Project Director for Lambda Legal in its Atlanta office, said in a prepared statement.

“In reaffirming without questioning a 1979 decision, the court is ignoring the sea changes in the law since then. It’s a cruel, paradoxical decision, since this very court ruled just six years ago that employers could not discriminate against LGBT people for not conforming to gender stereotypes,” Nevins added.

Evans sued in 2015, arguing that the hospital violated Title VII of the Civil Rights Act of 1964 by discriminating against her on the basis of her sexual orientation and her nonconformity with gender norms and appearances. In September 2015, a federal judge ruled that sexual orientation was not a protected class under Title VII and dismissed the lawsuit without holding a hearing.

In December, Lambda Legal argued that the case should proceed during a hearing before a three-judge panel of the appeals court. On March 10, the court ruled 2 to 1 against Evans.

In its petition, Lambda argues that the case warrants a hearing by the full court to resolve questions about the scope of federal non-discrimination laws and to reconsider what it calls an “erroneous” decision from the panel.

“There is widespread recognition among the courts, including this Court, thatquestions about the scope of federal nondiscrimination laws are questions of such exceptional importance affecting the rights of thousands of individuals that they warrant en banc consideration. Indeed, the disposition of this petition would decide not only the statutory rights of Jameka Evans, but also of countless others who may not have redress for future instances of sexual orientation discrimination, and well might not be subject to such discrimination in the first place if this Court sends a clear message that such discrimination is unlawful.”

Lambda has also argued that the appeals court, in its 2011 decision in Glenn v. Brumby, ruled that it was “unfair and illegal” to discriminate against an employee based on their employer's gender stereotypes. That is what happened to Evans, Lambda argued.

“In 2011, in Glenn v. Brumby, this Court said it was unfair and illegal to discriminate against an employee because who they are does not meet their employer’s gender stereotypes. That is exactly what happened to Jameka Evans; and she along with other lesbian, gay, and bisexual people will remain vulnerable at work if courts rely on old case law that interprets federal employment law too narrowly,” Nevins said.