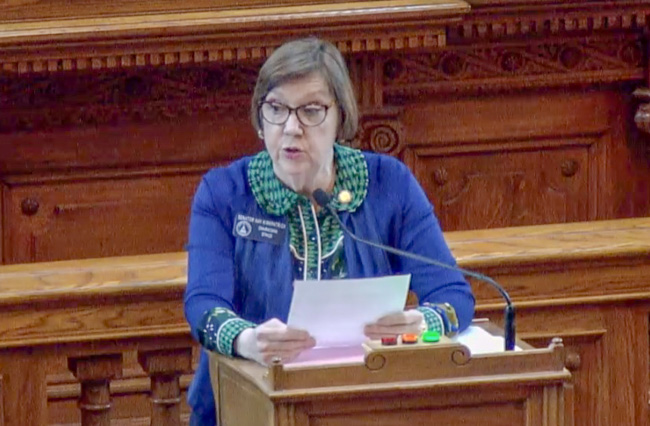 Gov. Brian Kemp will now decide the fate of a Republican-sponsored bill that creates a needle exchange program that could help reduce HIV rates in Georgia.

HB 217 would create a syringe services program to allow people who inject drugs to exchange used needles for clean ones. Programs like these reduce the spread of HIV and hepatitis C, according to the Centers for Disease Control & Prevention.

Sen. Kay Kirkpatrick, a Republican from Marietta, was the Senate sponsor of the bill.

“Although getting control of this epidemic is going to need more than one solution, this is a fiscally conservative step towards improving the public health of our state,” Kirkpatrick said Monday as she introduced the bill on the Senate floor.

Kirkpatrick (top photo) said the program would include substance abuse and harm reduction counseling, screening for HIV, hepatitis C and other sexually transmitted diseases, and referral to treatment for people with substance abuse disorders.

“These programs are evidence-based and have shown not only reductions in new HIV and hepatitis C cases, but also individuals in these programs are five times more likely to enter into treatment programs, according to the CDC,” she said.

Kirkpatrick added that by reducing the number of dirty needles in circulation, the program has the “side benefit” of helping protect law enforcement and first responders from getting accidentally infected.

Four lawmakers voted against the bill on Monday – Republican Sens. Brandon Beach from Alpharetta, Steve Gooch from Dahlonega, William Ligon from Brunswick and Blake Tillery from Vidalia. Ligon voted for the same version of the bill in a Senate Health & Human Services committee meeting on March 18.

Rep. Houston Gaines, a Republican from Athens, was the House sponsor of the bill.

HB 217 is the first HIV bill of the 2019 session to pass both chambers of the legislature. Kemp can either sign the legislation into law, veto it, or leave it unsigned and it becomes law.