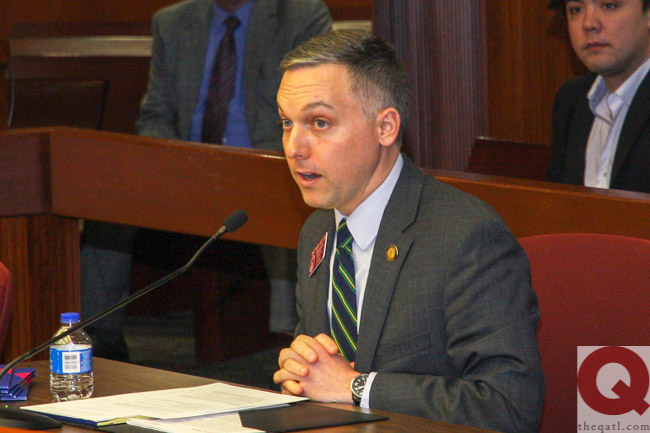 Georgia lawmakers vetted a proposed ban on conversion therapy for minors during a first-ever legislative hearing in the state about the controversial issue on Tuesday.

Lawmakers on a special subcommittee heard testimony from mental health experts, LGBTQ advocates and a survivor of conversion therapy.

State Rep. Matthew Wilson, a Democrat from Brookhaven who sponsored the legislation, told subcommittee members he introduced House Bill 580 “because we have a crisis in Georgia right now.”

Wilson (top photo) said that LGBTQ youth who undergo conversion therapy are three times more likely to attempt suicide than those that don’t.

“The coalition that is with me here today believes all children should receive care that first does no harm. And that’s why we’re here today,” he said.

HB 580 would ban professional counselors in Georgia from giving people under 18 years old “any treatment that seeks to change an individual’s sexual orientation or gender identity, including efforts to change behaviors or gender expressions or to eliminate or reduce sexual or romantic attractions or feelings toward individuals of the same gender,” according to the bill.

The legislation does not ban counseling for people undergoing gender transition, and does not ban “counseling that provides acceptance, support and understanding,” according to the bill. It would apply to licensed social workers, psychiatrists and psychologists, who would face “discipline by the appropriate licensing authority” for violating the ban.

Rep. Ginny Ehrhart, a Republican from Powder Springs, questioned why the bill includes a ban on therapy to change someone’s gender identity. She said sexual orientation and gender identity “are diametrically different conditions with diametrically different treatments.” She added that a child’s sexual orientation “doesn’t require any sort of intervention.”

Wilson said medical experts advised him to include gender identity in the bill.

“They both are fundamentally immutable characteristics of a person and who our children are and are developing to be, and that should be protected,” he told Ehrhart. “A child’s childhood should be a safe space where children are free to develop into the people they are going to become.”

Ehrhart, who compared transgender people to animals during her campaign last year, again raised her objection to gender identity being included in the bill later in the hearing.

“My concern is if there is anything here that may be getting in the way of parents of children who have gender dysphoria from seeking appropriate treatment for those children,” she said. “It’s not like sexual orientation. Very different.”

The subcommittee also heard testimony from Jennifer Holton, a board-certified child and adolescent psychiatrist. She said that there’s no scientific evidence to support the efficacy of conversion therapy.

My job is night shift and I have to drive at nights to get to my job. This is terrible since I hate driving at nights. Im having panic, I feel like something bad will happen to me. I made a research about benzo medications, so Klonopin (Clonazepa) was the medicine I chose. I took a consultation with my doctor and she agreed to start with a small dose of klonopin. Now I take it in the evenings and happily drive to my job. Thanks to this kind of medications I feel myself confident. Information located on the website https://livingwellnessmedicalcenter.com/klonopin-clonazepam/ helped me greatly.

Peter Nunn, a gay business owner in Norcross, testified about his father putting him into conversion therapy when he was 15.

“The therapists there told me that God punished gays with AIDS to kill them, that he rained fire on people in Sodom and Gomorrah because of their homosexuality, and that there’s no room in Heaven for homosexuals,” Nunn said.

After he returned home from the therapy, Nunn (second photo) said his parents didn’t discuss it.

“If I had sexual thoughts about men, I would punch myself in the stomach,” he said. “After my conversion therapy experience, I pretended to be fine yet felt hopeless and alone.”

Nunn said he attempted suicide soon after, and he continued to experience severe depression, anxiety and suicidal thoughts.

He said he is now happily married and that his mother attended the wedding.

“Our wedding was small, but full of people who love and support me, and I’m living a full and happy life — something I was told by a licensed therapist would be impossible,” Nunn said.

The subcommittee of the House Regulated Industries committee did not vote on the bill during Tuesday's hearing. Wilson said he plans on revisiting the bill when the legislature reconvenes in 2020.