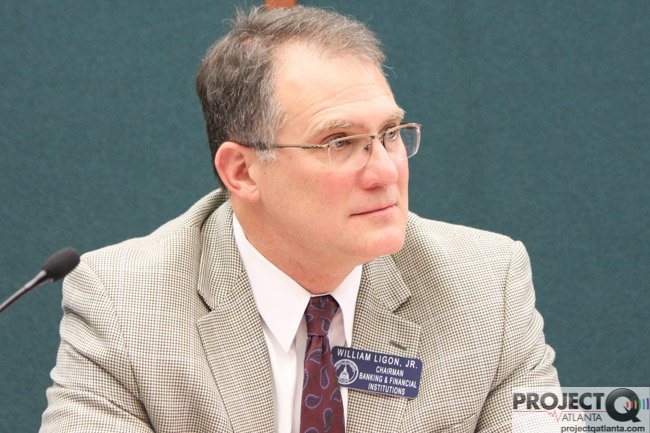 A conservative Georgia lawmaker wants to ban “free speech zones” on college campuses, but the proposed legislation would allow campus groups to discriminate against LGBTQ students, according to a leading LGBTQ advocate.

State Sen. William Ligon, a Republican from Brunswick, introduced Senate Bill 318 in January. It would ensure that all common areas on public college campuses are open to speakers, no matter how controversial they are, according to Ligon (photo).

But one provision in the bill “would create a license to discriminate on the basis of religion,” according to Jeff Graham, executive director of Georgia Equality. The provision prevents public colleges from denying benefits or privileges to a student organization based on the “actual or anticipated expressive activity of the organization,” according to the bill.

That's an attempt to circumvent a 2010 U.S. Supreme Court ruling that said schools can refuse funding to student groups engaged in discriminatory conduct, according to Graham (second photo). The case concerned a Christian student group that barred gay students from leadership positions.

“As long as that language is in [SB 318], you could have a student that wants to be a part of a political or religious organization who is not there to disrupt, who believes in the values, principles and policies of that student group, but could be excluded strictly because of their sexual orientation or gender identity,” Graham said.

“The right to free exercise of religion does not equal a right to discriminate,” he added.

Ligon and Matt Sharp of the anti-LGBTQ legal group Alliance Defending Freedom presented the bill at a Senate Judiciary Committee meeting on Feb. 19.

“The purpose of this to ensure that the First Amendment rights of free speech of students are recognized and honored on our university campuses, and what we’ve seen over a period of time is that suits have to be filed to protect those rights,” Ligon said at the hearing.

The co-sponsors of SB 318 include state Sens. Butch Miller, Randy Robertson, Bill Heath, Bruce Thompson and Marty Harbin. They are all Republicans. 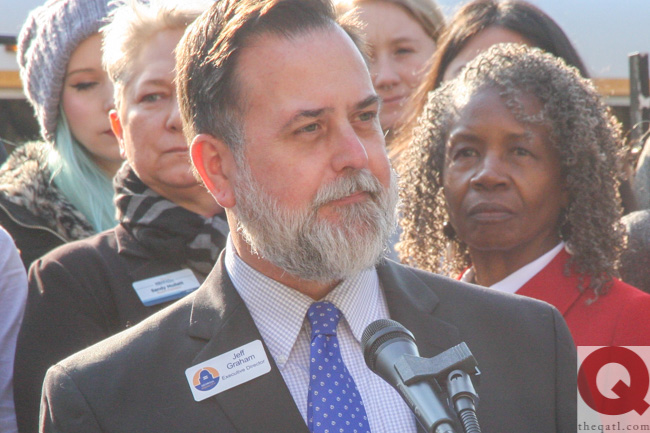 Ligon’s bill follows the filing of several lawsuits in Georgia by student-led and national conservative groups regarding free speech rights.

Alliance Defending Freedom filed two lawsuits against Kennesaw State University in 2018 on behalf of two conservative student groups, according to the AJC. One lawsuit claimed the school engaged in “viewpoint discrimination” by charging the group extra money for security costs for a guest speaker. The other lawsuit said school rules for where students can speak and post displays on camps are restrictive and unconstitutional.

Those lawsuits sparked a hearing that year before a Georgia House subcommittee, where Republican lawmakers questioned the funding of Kennesaw State’s LGBTQ center and mocked gender-neutral pronouns as “fantasy language.”

Alliance Defending Freedom also represents two students in a lawsuit against Georgia Gwinnett College, according to the AJC. The students claimed their free speech rights were violated when an official told them they couldn’t distribute fliers about Christianity. The 11th U.S. Circuit Court of Appeals ruled against them in 2019, and ADF asked the U.S. Supreme Court to take up the case.

ADF also sued Georgia Tech in 2006 for its use of free speech zones, according to the AJC.

Ligon has a long anti-LGBTQ track record in the state legislature. He sponsored an anti-LGBTQ “religious freedom” bill in 2017. He also added an amendment to a 2017 bill that would allow faith-based adoption agencies to discriminate against LGBTQ people seeking adoptions. The amendment killed the bill.

Ligon tried again in 2018 by introducing a bill that would allow faith-based agencies to ban LGBTQ couples from adopting. It passed in the Senate but never made it out of the House.

Ligon sponsored another anti-LGBTQ “religious freedom” bill in 2019, but it has failed to gain any traction.

Harbin, a co-sponsor of Ligon's bill, filed his own legislation in early February that would allow adoption and foster care agencies in Georgia to refuse to place children with LGBTQ couples.

LGBTQ activists, lawmakers and other elected officials are speaking out, launching organizations and backing legislation to rid Georgia of its Confederate symbols — including...
Read more
News

Georgia lawmakers pumped an additional $15.44 million into a program for low-income people living with HIV, preventing a crisis that could have created a...
Read more