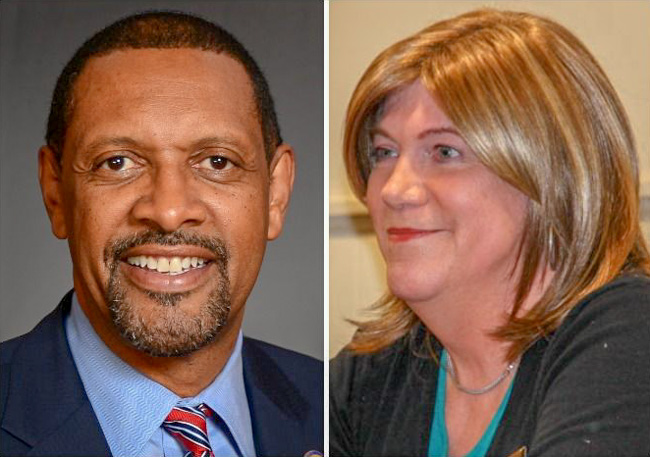 A Democratic lawmaker from Lithonia allegedly made anti-transgender comments to Doraville City Councilmember Stephe Koontz at the State Capitol on Tuesday.

“Tried to talk to Vernon Jones about his ‘Sanctuary City’ bill,” Koontz (photo right) wrote on Facebook. “He starts yelling at me and then changes tack and start into a rant about my gender identity saying, ‘you might be a man one day and a woman the next, I don't even know what you are.’”

“How do Democrats support this transphobic bigot who is yelling at folks that LGBTQ rights are not civil rights?” Koontz added.

Project Q Atlanta tried reaching Koontz to ask about the incident but did not hear back.

Jones (photo left) said “my recollection of the conversation is different.”

“The Constitution guarantees everyone their rights,” he said. “I believe in standing for equality for every citizen regardless of their race, party, gender or their orientation.”

When asked what he did say to Koontz, Jones said, “My comment stands.”

Koontz is the only openly transgender elected official in Georgia. She was elected to the Doraville City Council in 2017 and was named mayor pro-tem in January. She also spearheaded a regionwide push to bring LGBTQ nondiscrimination protections to cities in metro Atlanta.

Jones served in the Georgia House from 1993 to 2001 and was DeKalb CEO from 2001 to 2009. He spoke out against same-sex marriage during the 2004 debate in Georgia over a constitutional amendment banning marriage equality, and again during a 2008 campaign for U.S. Senate. He was re-elected to the Georgia House in 2016 after unsuccessful runs for Georgia’s 4th Congressional District seat and for DeKalb County sheriff.

Jones will face legal consulting firm owner Rhonda Taylor in the Democratic primary for House District 91 in May.

UPDATE | Koontz followed up after this story was published to give details about the incident with Jones.

She was at the Capitol on Tuesday to talk with lawmakers about House Bill 1083, which targets so-called “sanctuary cities.” Jones is a co-sponsor of the measure.

Koontz said she tried to talk to Jones about the bill, but he began yelling at her after she called the measure “an unfunded mandate.”

“When I said you’re not even acting like a Democrat, he said gay rights are not civil rights,” she said. “Then he said, ‘You’re a man one day, you’re a woman the other, I don’t even know what you are.’”

“It was a bizarre interaction,” she added.

State Rep. Park Cannon witnessed the exchange, according to Koontz. Cannon is one of five openly LGBTQ members of the legislature.

“She walked up and said, ‘No Vernon, you don’t get to say that,’” Koontz said.

We reached out to Cannon but have not heard back.

Cannon told House Minority Leader Bob Trammell about the incident, according to Koontz.

“He apologized for Vernon’s behavior and said that was absolutely inappropriate,” she said.

Koontz has been to the Capitol before, but Tuesday was the first time she went there to talk to lawmakers about a bill.

“And this is what happens,” she said. “And as the only transgender elected official in the state, is that how we’re treated down there?”