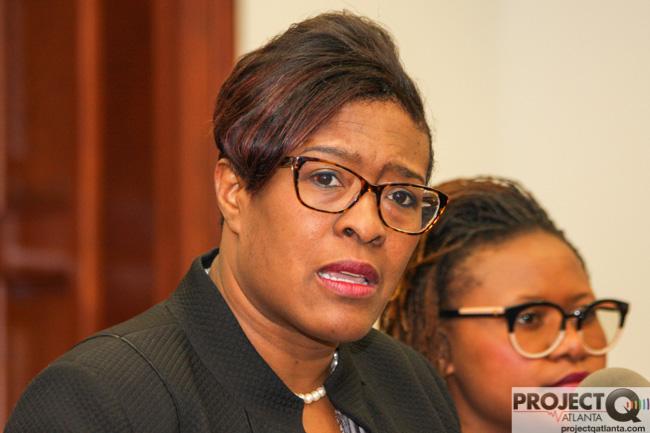 A state lawmaker wants to replace the hate crime law Georgia once had, introducing an LGBT-inclusive measure to spark a conversation about protecting marginalized groups that are targets for violence.

“We have a moral obligation as a member — on the Republican side, the Democratic side, representative or senator — that we represent all 10 million Georgians,” said Waites, one of four openly LGBTQ state lawmakers.

“I don’t just represent District 60, I represent everybody in the state of Georgia and [they] deserve a level of protection, to know that they can enjoy, live, work, and play free from the threat that they may be attacked because of someone else’s hatred,” she added.

House Bill 492 would increase penalties for crimes committed against someone, “because of such individual's actual or perceived race, color, religion, national origin, gender, sexual orientation, gender identity, or disability.”

Waites pointed to the growth in violence since Donald Trump’s election, citing recent reports of violence against Muslims and LGBT people around the nation, including the murders of three transgender women in Louisiana. This week, a metro Atlanta judge handed down stiff sentences to two participants to a days-long racist rampage through Douglas and Paulding counties that he called a hate crime. Jewish community centers and Anti-Defamation League offices around the country, including in Atlanta received bomb threats in recent days.

“There is an all out, full blown assault in the South where transgender women are being murdered on a daily basis,” Waites said.

Passing a new hate crime law faces a steep legislative hurdle in Georgia. Waites proposed a similar measure with specific protected categories ahead of the 2013 legislative session but the bill went nowhere. LGBT groups have focused instead on fighting off anti-gay “religious freedom” legislation during the last several legislative sessions from Sen. Josh McKoon and most recently from Sen. Marty Harbin.

Sen. Vincent Fort, who sponsored the original legislation, later tried and failed to pass another hate crime measure in 2007. Fort joined with Sen. Nan Orrock and then-Sen. Kasim Reed to propose the bill on the 10th anniversary of the Otherside bombing. The Midtown gay bar was bombed by Eric Robert Rudolph on Feb. 21, 1997.

The Anti-Defamation League, which fights anti-Semitism, launched a campaign in 2015 to bring hate crime laws to the five states without them – Georgia, Arkansas, Indiana, South Carolina and Wyoming. But that campaign, called 50 States Against Hate, also seems to have stalled.

“I think given the bias you have seen on the national level, whether it’s in the name of religion, or sexual orientation, or race, I think it’s important to have those protections in place at the state level,” Waites said. “Whether or not this bill passes, we have a moral obligation to raise the issue, to raise the conversation.”

The bill did not make it through Crossover Day on March 3, a deadline in which legislation must pass one chamber of the legislature to remain active. But this is the first year in a two-year legislative cycle, so Waites’ bill will be held over into the 2018 session.