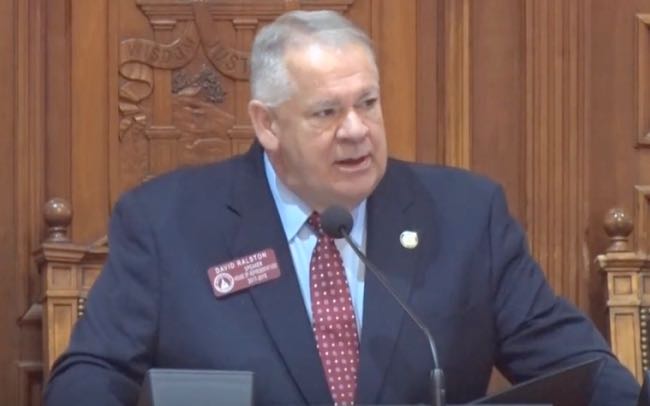 House Speaker David Ralston reached out to LGBT Georgians on Monday, a surprising nod to inclusion at a time of heightened anxiety over whether lawmakers will pursue anti-gay legislation.

Ralston was re-elected 169-6 to another term as Speaker on Monday. During an 11-minute speech, the Republican leader struck an upbeat, optimistic tone about his hopes for the new legislative session. He also made it clear that the voices of gay and lesbian Georgians should be heard at the State Capitol.

“It is my hope that we begin this work with a spirit of optimism and with a commitment to the ideals of civility, mutual respect and decorum,” Ralston said.

“We represent distinct districts. We each have an obligation to give voice to those who look to us for leadership. Regardless of political party, whether you are rural, urban or suburban, regardless of gender, age, ethnicity or sexual orientation, you each are a member of this people’s House,” he added.

It’s a remarkable nod to inclusion from Ralston, who less than a year ago presided over a House that overwhelmingly approved sweeping anti-LBGT “religious freedom” legislation. Gov. Nathan Deal later vetoed the bill.

“We’ve dealt with that for three years. I’ve sort of taken the hits on a couple of those years and I’m willing to take the hits again this year. I don’t know that an issue that so divides Georgia as that one does is something that we need to be devoting a lot of attention to. We passed a good bill out of the House last year, the Pastor Protection Act. I support that bill and if someone wants to bring that bill back this year then I will certainly support it,” Ralston said last week.

“Georgia’s got so many good things going right now and I’m not sure that we want to model after North Carolina and Indiana and some other states like that. I think we have to be very, very careful. I’m not going to devote a lot of energy to that this session because it’s taken too much, frankly,” he added.

“Georgia in 2017 is far different than Georgia in 1889. Today we are a growing dynamic state reaching with optimism to a future filled with promise and greatness anchored by time-tested principles and celebrating our diversity as a people,” he said.

Ralston also applauded the state’s film and music industries, which generate billions in revenue for the sate and thousands of jobs. Concerns over the loss of the state’s entertainment industry helped fuel opposition to anti-LGBT legislation in 2016 while anti-gay activist scowled at “Hollywood values” helping defeat the bills.

“[Georgia is a state] that has become a leader in the movie industry and music industry while still leading the way in agribusiness,” Ralston said.