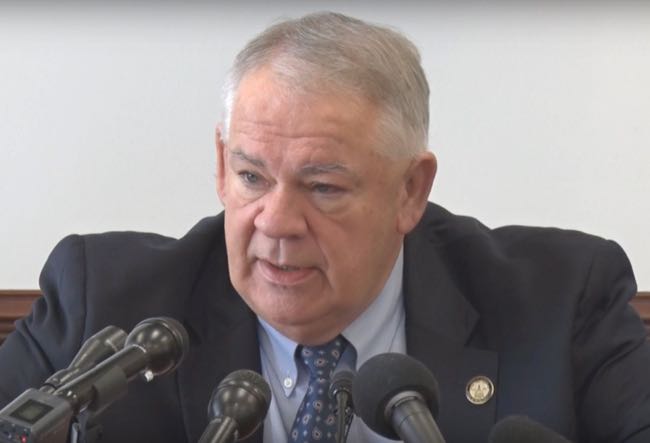 House Speaker David Ralston said he has “serious concerns” about anti-LGBTQ “religious freedom” legislation and he undercut the main argument other GOP lawmakers have made in support of it.

“The states that have passed it, or have talked about it in the last few years, have not had good experiences. And I don’t want Georgia to have that experience,” Ralston (top photo) told the AJC.

Ralston also said that times have changed since the federal Religious Freedom Restoration Act was signed in 1993.

I think we have to recognize that the world’s a much different place than when Bill Clinton signed a bill that the Congress passed in ’93. The RFRA discussion then was totally different. It wasn’t about what it’s about now. That’s one of those issues that divide us, and I think if we’re going to continue to move Georgia forward, we have to do it united as opposed to being divided.

Ralston's comments make the same argument against the legislation that LGBTQ activists have been making for years. GOP lawmakers like state Sen. Josh McKoon have long argued that a state version of RFRA would simply mirror what’s already federal law.

Georgia Equality Executive Director Jeff Graham pointed out the flaws in that argument in a recent interview with Project Q Atlanta.

“While the federal RFRA had strong support across the political spectrum in 1993, the past decade has seen the courts interpreting RFRA in ways that the original sponsors never intended,” Graham said in August. “This has led to the federal RFRA being used to justify the denial of healthcare, counseling, and other social services that are funded using public dollars.”

Gov.-elect Brian Kemp has vowed to sign a “religious freedom” bill into law that mirrors the federal version.

Ralston also told the AJC that he would “have to think through” whether he would support “religious freedom” legislation if it were paired with a statewide civil rights law.

The new legislative session — and a sixth straight year of debate on “religious freedom” bills — approaches on Jan. 14.

State Sen. William Ligon, a Republican from Brunswick, recently signaled his intentions to take up a new fight for “religious freedom” legislation in the next session, calling the Georgia Chamber of Commerce’s opposition a “charade.”