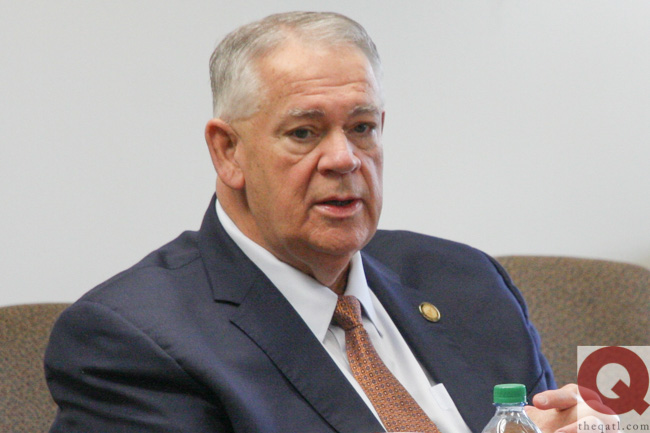 Ralston (photo) made the comments on GPB’s Political Rewind podcast on Wednesday in advance of the 2020 legislative session, which starts in January. He said he’s made his opposition to “religious freedom” bills “pretty clear” over the years.

“And it’s a position that I’m comfortable on in my own conscience and in my faith,” he told GPB. “And I’m also comfortable when I look at the experience of other states [who have passed such legislation]. North Carolina. Indiana. Arkansas came real close.”

“I’ve never had any leader from any of those states — and I’ve talked to some from all of them — say, ‘Y’all really oughta do this. It’s a great thing to do,’” he added.

Ralston, a Republican from Blue Ridge, made similar comments against the bills in advance of the 2019 legislative session, calling them “a solution in search of a problem.” One such bill was introduced in the Senate, but it stalled in committee. It will return in the 2020 session, which starts in January.

Ralston also said Wednesday that he has not discussed an anti-transgender bill with its sponsor, state Rep. Ginny Ehrhart. The West Cobb lawmaker announced on Oct. 30 that she’s introducing a bill that would make it a felony to give hormone treatments or perform gender affirmation surgery on minors.

“Anytime though that you have an issue that touches on the parent-child relationship and on medical ethics and those kinds of questions, there is a great sensitivity there and a great deal … they’re just tough issues,” he said. “So I will read the bill if it gets in bill form.”

The conversation on “religious freedom” legislation and Ehrhart’s bill begins at the 27-minute mark of the Political Rewind podcast.

Bills that were introduced in the 2019 session and will return in the 2020 session include an LGBTQ-inclusive civil rights bill, a bill about prayer in public school, a bill to modernize K-12 education on HIV, a bill to give HIV-positive Medicaid recipients the most effective medications, a hate crimes bill, a conversion therapy ban and an HIV criminalization bill.