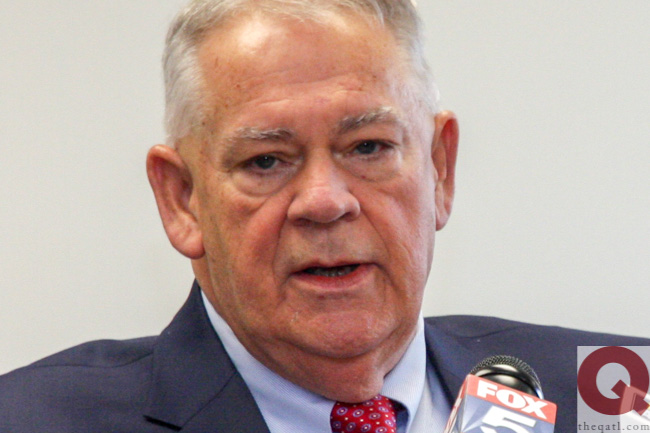 Ralston (photo), a Republican from Blue Ridge, shut the door on anti-LGBTQ amendments to any adoption reform bills in the House in this year’s legislative session, which begins Jan. 13.

“I thought it was incredibly ill-conceived and offensive that one of the most important pieces of legislation that we passed that year got hung up in the Senate over that issue and I will advocate very strongly that that not get hung up again,” Ralston said.

Gov. Brian Kemp told the AJC on Monday that adoption reform was one of his leading priorities this session, and that he would address any anti-LGBTQ provisions if they are introduced.

Ralston also reiterated his opposition to anti-LGBTQ “religious freedom” bills, which have roiled the legislature for the past several years. One such bill was introduced in the Senate last year but stalled in committee and will return this year.

Ralston pointed to an anti-LGBTQ “religious freedom” bill that Indiana passed in 2015 under then-Gov. Mike Pence, which caused a nationwide uproar.

“When you look at the experience of other states, I think you could probably call Vice President Pence and get his take on that, which would probably be a little different than whoever’s got the bill in the Senate,” Ralston said. “I think it’s a solution in search of a problem.”

Ralston said he has not read a bill that would ban transgender youth from competing in athletic events at public facilities. State Rep. Philip Singleton, a Republican from Sharpsburg, filed it in December, leading to condemnation from LGBTQ activists and the Democratic Party of Georgia.

“Anytime though that you have an issue that touches on the parent-child relationship and on medical ethics and those kinds of questions, there is a great sensitivity there and a great deal … they’re just tough issues,” he said at the time. “So I will read the bill if it gets in bill form.”

Ehrhart has not yet filed the bill.

Two bills introduced in the House last year that tackled the state’s HIV epidemic passed in both chambers and were signed into law. Ralston was optimistic about such efforts continuing this year.

“I hope we can move further on that,” he said Thursday. “l would be hopeful that we could make further progress on that.”

Bills that were introduced in the 2019 session and will return in the 2020 session include an LGBTQ-inclusive civil rights bill, a bill about prayer in public school, a bill to modernize K-12 education on HIV, a bill to give HIV-positive Medicaid recipients the most effective medications, a hate crimes bill, a conversion therapy ban and an HIV criminalization bill.

This story was originally published by the Georgia Recorder. A group of Democratic lawmakers staged a sit-in at the state Capitol after Democratic Rep. Park...
Read more
Politics

A gay Brookhaven lawmaker filed legislation that would make Georgia the first state in the South to ban conversion therapy for minors. Meanwhile, a...
Read more

This story was originally published by the Georgia Recorder. A group of Democratic lawmakers staged a sit-in at the state Capitol after Democratic Rep. Park...
Read more
Q ATLus

All dressed up with no place to go? Nu-Uh. It’s nowhere to go and all dressed up anyway!  Hoodies and sweatpants have seen too...
Read more
Politics

A gay Brookhaven lawmaker filed legislation that would make Georgia the first state in the South to ban conversion therapy for minors. Meanwhile, a...
Read more
Community

Kip Dunlap came by his interest in politics and liberal leanings naturally. The Georgia native credits his parents with the spark that led him...
Read more
Load more
17,369FansLike
7,001FollowersFollow
7,682FollowersFollow