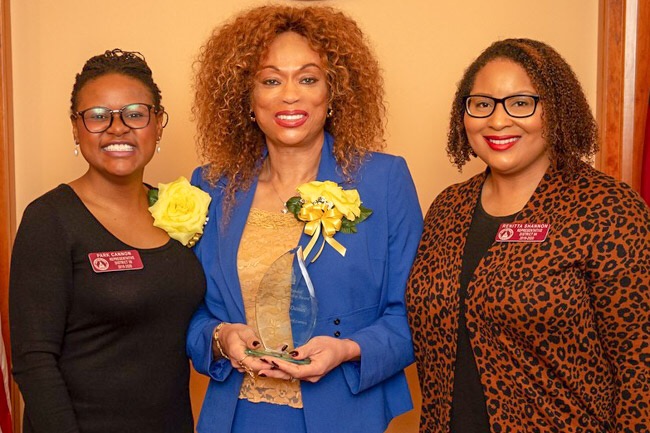 McDaniel (photo center) was also recognized with a proclamation on the floor of the Georgia House.

House Resolution 1370 cited how McDaniel “has established a glowing reputation of renown throughout Georgia for her deep personal commitment to the welfare of the trans and gender nonconforming citizens of Georgia.”

The Legislative Women’s Caucus presented the 2020 Yellow Rose Nikki T. Randall Servant Leader Award to McDaniel at a breakfast on Tuesday before the House legislative session opened. Randall was the first African-American woman elected to the state legislature in 1999, according to the resolution.

State Rep. Park Cannon, a Democrat from Atlanta, sponsored the resolution. Cannon (photo left) is one of five openly LGBTQ members of the state legislature.

“Representation matters,” Cannon said. “We deserve to see black women of trans experience facing more than just violence and injustice. Our office is committed to changing the narrative.”

“We are celebrating Women’s History Month by standing side-by-side with Tracee McDaniel and the communities she serves,” she added.

The other sponsors of the resolution were state Reps. James Beverly of Macon, Carolyn Hughley of Columbus, Sharon Beasley-Teague of Red Oak, Bob Trammell of Luthersville, William Boddie of East Point and Renitta Shannon of Decatur.

Trammell is the House Minority Leader, Boddie is the Minority Whip and Beverly is the Minority Caucus Chair. Shannon (photo right) is also one of the five openly LGBTQ members of the legislature.

Recognition like this is important to increase the visibility of trans people, McDaniel said.

“We’re literally fighting for our lives, solely based upon how we identify, and the explicit and implicit biases enacted upon us by other people,” she said. “I believe that our visibility saves lives, which is why we need to show up and participate for equity, and human and civil liberties protections.”

McDaniel is the founder and executive director of the non-profit Juxtaposed Center for Transformation. She became the first trans member of the Atlanta Citizen Review Board in 2016, and was named to Atlanta Mayor Keisha Lance Bottoms’ LGBTQ Advisory Board in 2018. McDaniel is also the co-founder and is on the board of directors of the Trans Housing Atlanta Program.

McDaniel’s honors came on the same day that a Democratic lawmaker made anti-trans comments to Doraville City Councilmember Stephe Koontz at the Capitol. State Rep. Vernon Jones allegedly told Koontz – the state’s only openly trans elected official – “you might be a man one day and a woman the next, I don’t even know what you are.”

Cannon honored gender nonconforming actor, entertainer and activist Miss Lawrence with a proclamation in the Georgia House in 2019.

The Georgia House honored Gwinnett School Board Member Everton Blair with a proclamation in February. Blair is the first openly gay and youngest-ever member of the board.

Rev. Kim Jackson made it official on Monday as she was sworn into office and became the first LGBTQ state senator in Georgia history. Jackson...
Read more
Politics

When the Georgia legislature gaveled into its 2021 session on Monday at the Gold Dome, a record number of LGBTQ lawmakers swore their oaths...
Read more
Politics

Whether you seek virtual powwows, distanced drag or the reverence and revelry fit for a “King,” Atlanta’s LGBTQ events are here for your weekend...
Read more
News

When coronavirus created nationwide shutdowns last March, artists and entertainers were among those whose steady income evaporated in a matter of days. That includes...
Read more
Load more
17,369FansLike
6,586FollowersFollow
7,682FollowersFollow