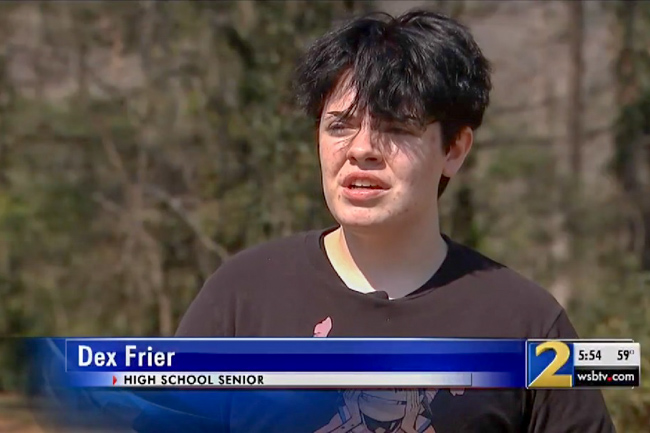 Students at a high school in Gainesville, Ga., nominated a transgender boy to be prom king, but the school reportedly removed him from the ballot.

Johnson High School senior Dex Frier, 17, said he was one of six male students nominated for prom king, but school officials told him he could only be on the prom queen ballot, according to WSB-TV.

Hall County Schools Superintendent Will Schofield told WSB-TV that the district has never removed a student from a prom or homecoming court. He also wouldn’t comment on Frier’s claims, citing “the privacy rights of our student body.”

“On a broader note, I am not interested in being responsible for placing our school district in the middle of a national social, societal and legal issue which would have the potential to substantially disrupt us from our core mission of providing an education for the boys and girls in our community. Prom should be a time for students to fellowship together and celebrate their local school.”

The high school’s prom is Saturday.

Frier told the Gainesville Times that he began publicly identifying as a male during his sophomore year. Frier's grandmother and guardian, Lisa Frier, told the media outlet the family has had to learn about transgender issues.

“I haven’t always understood,” she said.

More important, however, is that he is treated with kindness and equity, she said. People are entitled to their opinion but not entitled to hurt others with it, she said.

“That’s really what the lesson is children need to understand,” Lisa Frier said.

She also supports his candidacy for prom king.

“I support Dex in the pursuit of happiness and well-being,” Lisa Frier said. “I think he’s gotten a little empowerment from this petition.”

“I have some of the most supportive friends I could ask for surrounding me — actually I’m surrounded about 12 people right now,” he said, laughing, during his interview with BuzzFeed News. “They just wanted to listen in to make sure I'm OK.”