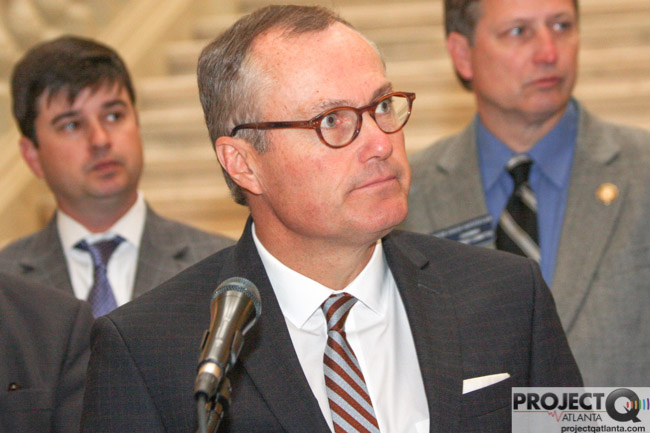 Hardliners in the Georgia GOP are intent on breathing new life into anti-LGBT “religious freedom” legislation with a litmus test for gubernatorial candidates. When the efforts make Casey Cagle look sympathetic, you know there's real trouble.

When the state committee for the Georgia GOP meets on Saturday, they'll consider a litmus test for Republican candidates for governor – a pledge that they support “religious freedom” legislation that has caused controversy and threatened to roll back protections for LGBT people. A portion of the resolution, via AJC:

“If elected Governor, I will actively support the Legislature in its efforts to pass an uncompromised, state-level RFRA that mirrors the federal RFRA. I will sign such a bill if it passes, protecting First Amendment rights, particularly the Free Exercise of Religion.”

The state party has passed resolutions backing the anti-LGBT legislation in the past, but this is the first with a pledge. And it seems aimed at Cagle (photo), the lieutenant governor and front-runner for the GOP nomination for governor. He backed the legislation in 2016 – when lawmakers turned it into an omnibus hate bill and Gov. Nathan Deal vetoed it – but punted to federal lawmakers in 2017.

It was a moderated stance from Cagle, one that helped him make peace with business and civic leaders he needs to support his campaign and other legislative goals. Cagle's opponents in the GOP primary favor “religious freedom” legislation, according to the AJC.

His three GOP rivals have staked out their positions: State Sens. Hunter Hill and Michael Williams both voted for the measure last year, and Secretary of State Brian Kemp has been supportive of it as well.

The push for the pledge is splintering the party, with new GOP Chair John Watson trying to broker a compromise between supporters and others who oppose the litmus test. Via AJC:

The supporters of the pledge are holding firm. Alex Johnson, a DeKalb attorney who has three times run for party chair, said the effort to remove the pledge wreaks of backroom shenanigans.

The internal party struggle is similar to the one that broke out publicly among Republican lawmakers earlier this year. Deal, Cagle and other top elected officials pushed “religious freedom” off the legislative agenda as the session opened in January. But some conservatives revolted and proposed a “religious freedom” bill, including Williams. When that failed, they inserted an LGBT ban into a bill reforming state adoption laws that scuttled the legislation that otherwise had bipartisan support.

Cagle, for his part, said he won't stand for discrimination against anyone when he launched his campaign for governor in late April.