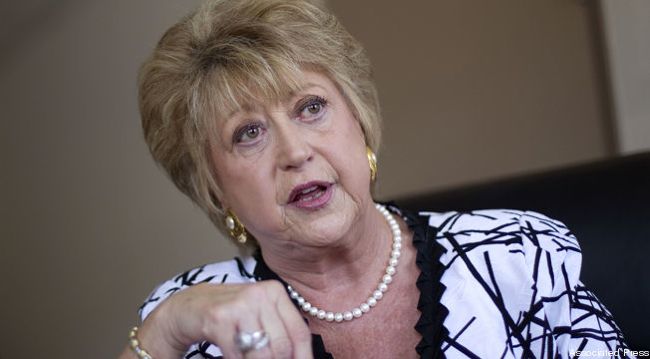 Gay Georgians can hoot and holler for marriage equality, but Sue Everhart is here to tell you that her Republican party isn't changing. Not only does the state GOP not back even a whiff of marriage equality, they oppose it in some of the most offensive ways possible. So much for being swept up in the marriage equality movement. Everhart (photo), chair of the state GOP, made that clear in an interview with the Marietta Daily Journal. She's worried about the gays committing marriage fraud.

“You may be as straight as an arrow, and you may have a friend that is as straight as an arrow,” Everhart said. “Say you had a great job with the government where you had this wonderful health plan. I mean, what would prohibit you from saying that you’re gay, and y’all get married and still live as separate, but you get all the benefits? I just see so much abuse in this it’s unreal. I believe a husband and a wife should be a man and a woman, the benefits should be for a man and a woman. There is no way that this is about equality. To me, it’s all about a free ride.”

And don't forget about gay parents trying to make their kids gay, too.

“You’re creating with this child that it’s a lifestyle, don’t go out and marry someone else of a different sex because this is natural,” Everhart said.

But really Sue, it's about the equipment, right?

“Lord, I’m going to get in trouble over this, but it is not natural for two women or two men to be married,” Everhart said. “If it was natural they would have the equipment to have a sexual relationship.”

Hey gay neighbors, do not worry. Everhart isn't advocating being nasty to you or anything. Just keeping you away from her marriages.

“But if I had a next door neighbor who was in a gay relationship I could be just as friendly to them as I could be to you and your wife or anybody else. I’m not saying that we ostracize them or anything like that. I’m just saying I’m against marriage because once you get the gay marriage you get everything else.”

So add Everhart to the state's long list of gay marriage bigots, who continue to party like it's 2004 when the GOP pushed through the state's second ban on gay marriage. Hey there Tanya Ditty, Randy Mickler, Rinda Wilson, Judy Manning and Sue Ella Deadwyler. And let's not forget Sen. Saxby Chambliss, who wants you to know he's not the gay marrying type.