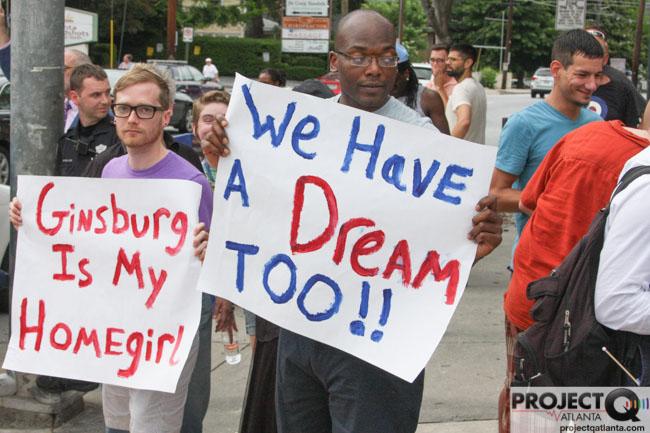 As Georgia Democrats evolve on gay marriage, the state's Republican Party wants you to know that it's the one boldly leading the charge on equality. Seriously. They said so.

Last week, as the nation celebrated MLK and the 50th anniversary of the March on Washington, Georgia Republicans attempted to position themselves as the party of "justice, equality and liberty." And hijack MLK's efforts to bolster their own.

The efforts of GAGOP Chair John Padgett and 1st Vice Chair Michael McNeely continued a day later, on Aug. 29, with this tweet.

The @gop has boldly lead the charge for equality & liberty for all. It is a legacy that we cherish & one that history will not soon forget. — GAGOP (@GaRepublicans) August 29, 2013

What about liberty for LGBT Georgians? #gapol #gagop MT @GaRepublicans : The @gop has boldly lead the charge for equality & liberty for all. — Anthony M. Kreis (@AnthonyMKreis) August 30, 2013

@GaRepublicans Not so sure you understand those words You certainly haven't treated me equally. #gaygeorgian — Darren J. Ryan (@darrenryan) August 30, 2013

Just a few months ago, Georgia Republicans made it clear that their equality does not include marriage equality. Padgett's predecessor, Sue Everhart, was mocked across the country for not only being an anti-gay bigot but for being a dumb one. She didn't want you to "get the gay marriage" mostly over her concern that "if it was natural they would have the equipment to have a sexual relationship."

Georgia Republicans are also the party of U.S. Rep. Paul Broun, who likes his boy penis; U.S. Sen. Saxby Chambliss, who doesn't want to marry a gay; and state Sen. John Albers, who dislikes gay Boy Scouts and their push for "merit badges for sexuality and political correctness."

Before bragging about its equality efforts, the Georgia GOP should also touch base with Karen Handel, Phil Gingrey, Erick Erickson, Randy Mickler, Rinda Wilson, Judy Manning and Sue Ella Deadwyler. And of course, Tanya Ditty. Or reach into the grave of Bobby Franklin and dust off some of his rabidly anti-gay ramblings.