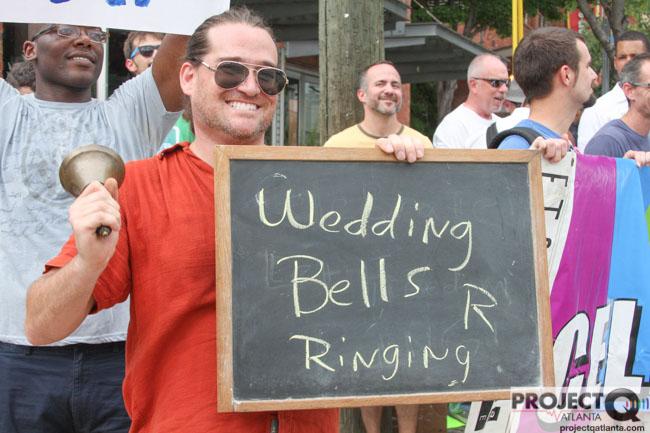 When older people die, especially aging Republicans, Georgia will get gay marriage. That's got to be a disappointing reality to Jake Walker, a gay man who hopes a little online clicktivism might mean wedding bells in the state.

The results of a new poll out Monday show that although public opinion in the state is shifting to favor marriage equality, it's not getting there fast enough. Which is why gay numbers geek Nate Silver says Georgia will be one of only six states with voters still against it. In 2020.

For now, be encouraged by what the Atlanta Journal-Constitution found in its survey (paywall) of 801 adults:

Question 1: “Do you think it should be legal or illegal for gay and lesbian couples to get married in Georgia?”

Question 2: “Has your opinion toward same-sex marriage changed over the past few years, or not?”
Yes, has changed: 16%
No, stayed the same: 83%
Don’t know/No answer: 1%

Why the optimism? That 48 percent favoring gay marriage is among recent polls confirming that a plurality of Georgians back gay marriage, which was banned in the state for a second time by a constitutional amendment in 2004. The AJC poll also showed that the largest support for gay marriage came from residents ages 18 to 39. That supports what Public Polling Policy found in August:

A majority of the state is still against gay marriage, with 60% of respondents still not down with it. That number shoots up to 83% against for Republicans, who are still frantically grasping with all their might onto these final golden years before Georgia's gays marry, therefore causing the dissolution of their own marriages, the homofication of their basset hounds, and the spontaneous combustion of their church choirs. Or so I've heard down at the Sip-N-Save.

And that's where Jake Walker comes in. The gay man from Crandall, Ga., launched an online petition asking Gov. Nathan Deal, no supporter of LGBT issues, and state lawmakers to repeal the state's nearly 10-year-old marriage ban. Excuse his all caps enthusiasm:

But the reality of repealing an amendment to the state constitution is more complex than a Change.org petition. The General Assembly must pass a repeal effort by a two-thirds vote and then voters get the final say. Exactly how the 2004 ban was put into place.