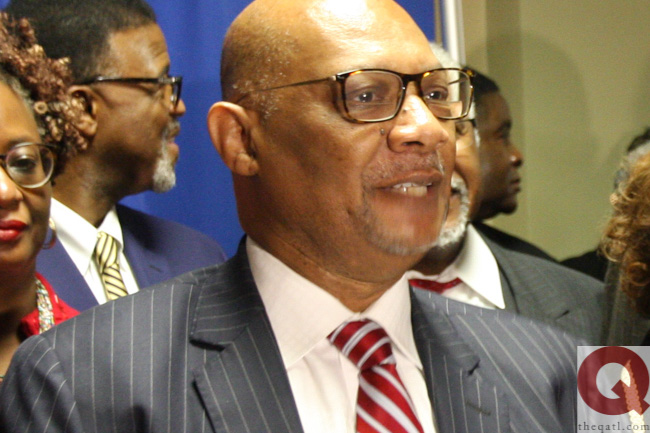 A prominent faith leader was among elected officials and other religious leaders who urged lawmakers in Georgia to join 46 other states across the U.S. and finally pass a hate crimes bill.

Bishop Reginald Jackson said during a press conference Monday that sexual orientation should remain as a protected class in House Bill 426, which passed in the House last year but stalled in the Senate. The bill is back for consideration in this year’s legislative session, which began Jan. 13.

“I think it’s a problem if you have hate against anybody no matter who it is,” Jackson (top photo) said. “I think it speaks to the prejudice of some in this legislature if it strips [sexual orientation] from the bill simply because of that.”

“I think in good conscience that anything or anybody who is facing hate, that needs to be in the bill,” he added.

Jackson is the presiding prelate of the Sixth Episcopal District, which encompasses over 500 churches in Georgia, according to its website. He was joined by lawmakers, several faith leaders and about 100 AME church members at the press conference at the State Capitol. 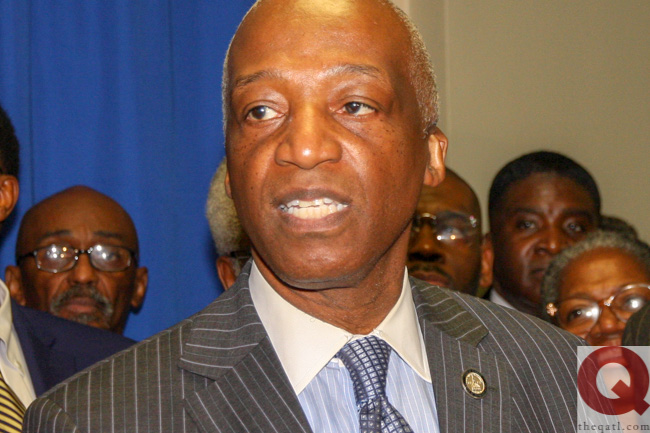 'Hate needs to not be tolerated'

Jackson and state Reps. Billy Mitchell and Karen Bennett will meet with Gov. Brian Kemp about the hate crimes bill on Monday, according to Mitchell (second photo).

“Certainly if we are successful in getting it out of the Senate, it’s going to land on the governor’s desk, so we would like to make sure he’s informed of all the elements of it and we hope he can lend all the support he can to the senators,” he told Project Q Atlanta.

Mitchell, a Democrat from Stone Mountain, also said sexual orientation should not be stripped from the bill.

“We think that all kinds of hate needs to not be tolerated, and certainly hate against someone because of their sexual persuasion should be one of those areas that is protected,” he said.

Bryant once compared homosexuality to drug addiction and called it a “rebellion” against God. He told the AJC in November that he’s “evolved” on LGBTQ issues, and now speaks out about HIV/AIDS in his sermons.

HB 426 does not include gender identity as a protected class, but there is language in the bill that would cover transgender people, according to Shelley Rose, deputy regional director for the Anti-Defamation League.

“While the term ‘gender identity’ is not included, we believe this bill will cover gender identity hate crimes because the language in the bill refers to offenses committed because of someone’s belief or perception,” Rose said in February.

One in five hate crimes in Georgia in 2018 were motivated by anti-gay bias, according to the FBI and Atlanta police. And Georgia agencies fall way behind the national average in reporting hate crimes to the FBI.