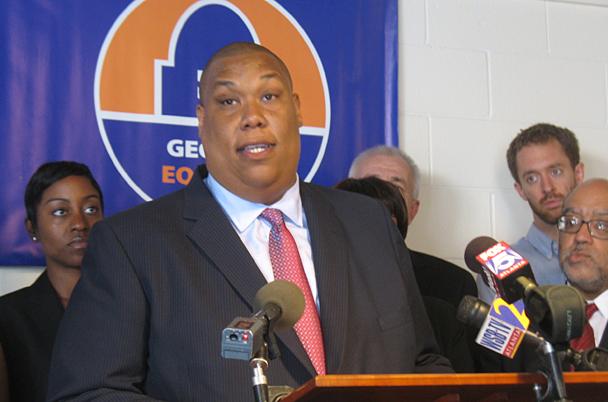 When it comes to election cycle endorsements, Georgia Equality nails it. Except when they are faced with a mess known as gay v. gay-friendly. Now we’ve got ourselves a bit of a pickle.

The statewide gay political group has already backed three LGBT incumbents and one gay politico making his first run for the state legislature. That latter candidate, Ken Britt, picked up Georgia Equality’s endorsement last week when the group’s executive director, Jeff Graham, delivered a 90-second pitch on why Britt should get your vote during a campaign kick off event.

But the stickier sticky wicket comes in the District 57 race, which is expected to pit two pro-gay incumbents – Rashad Taylor and Pat Gardner — against one another. Making it even more delicate: Taylor (photo) is gay and came out publicly last year in a press conference held at Georgia Equality’s offices. Thanks to Republican-led redistricting, one of these two progressive voices won’t be in the General Assembly next year.

Georgia Equality has done all three. In the 2010 race for the Fulton County Commission between lesbians Joan Garner and Keisha Waites, the group backed Garner over Waites, whom they had endorsed in a previous race. Earlier this year, the group did not endorse Waites in the special election for the District 60 seat in the state House. Waites won and Georgia Equality has since endorsed her campaign for re-election.

The group took a pass in the 2009 mayoral runoff that featured two gay-friendly candidates battling it out for LGBT voters. (Their neutrality came after the group’s endorsed candidate, Lisa Borders, didn’t make it to the runoff.) Georgia Equality also sat out the crowded District 6 race for the Atlanta City Council that year, waiting until the runoff to back Alex Wan, a gay candidate who later won.

So it’s a pickle. A big gay sticky wicket in District 57.

UPDATE: In addition to the Victory Fund endorsements of state Rep. Karla Drenner and Taylor, mentioned above, the group announced Wednesday that it’s also given its stamp of approval to state Rep. Simone Bell, Britt and Waites.