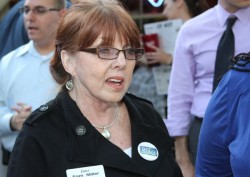 Pam Miller made the four-hour trek from Savannah to a sunny deck in Midtown on Friday. But this wasn’t just any lesbian looking to enjoy an end-of-the-week cocktail – she’s looking to become the next openly gay elected official in Georgia.

Miller (top photo), a civic leader and retired health administer, has her eye on the District 4 post on the Savannah City Council. She hopes to unseat incumbent Mary Ellen Sprague in the November election and in the process become the coastal city’s first openly gay council member.

Miller would join a growing list of the openly LGBT elected officials in Georgia, including state Rep. Simone Bell (bottom photo) and Doraville City Council member Brian Bates, who both attended Friday’s event. The meet and greet at Cowtippers was organized by Georgia Equality, which endorsed her campaign on Thursday. 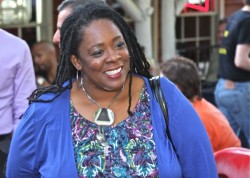 “I’m running first and foremost because I believe the citizens of Savannah deserve a leader that is committed to making sure every resident is given the same opportunity to live safely and happily in their neighborhood,” Miller told Project Q Atlanta in March. “Because Savannah is so diverse, and because we welcome that diversity, I also think it’s time that an openly gay person be elected to office.”

Miller lives in Savannah with her partner of 15 years.