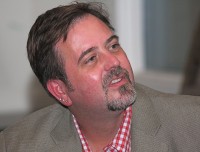 Statewide gay rights group Georgia Equality has endorsed 11 candidates in the current election cycle, including one for mayor and seven others for the Atlanta City Council. But it’s sitting out the competitive District 6 race.

The open seat has attracted six candidates — three gay men and three others — and is among the hottest political campaigns across Atlanta. But Georgia Equality says the deep pool of candidates in the heavily-gay Midtown district stands nearly together on LGBT issues, so the group’s board opted to wait until an almost-certain runoff when their backing could prove pivotal.

“In terms of looking at the candidates, the questionnaires that they submitted, looking at how they are conducting their campaigns, we really feel that when it comes to being strong supporters of LGBT issues and an advocate on city council, that there are a number of exceptional choices in this race,” says Jeff Graham (photo), Georgia Equality’s executive director. “So we have made the decision to wait until the runoffs to issue an endorsement.”

Graham says that with the candidates “evenly-matched” on LGBT issues, Georgia Equality is encouraging voters to consider other, non-gay issues in their assessments of the six candidates.

But in races where the candidates may not be the same on LGBT issues, the group has named their pick. Graham points to the At-Large Post 1 race in which the group endorsed gay candidate Adam Brackman over Chris Vaughn and Dwanda Farmer, both gay-friendly candidates who have courted LGBT voters. Atlanta Stonewall Democrats and Georgia Log Cabin Republicans have also endorsed Brackman.

“In 2009, the LGBT community is spread throughout the city of Atlanta and we really feel that it is important that we have a strong voice in city government in this At-Large seat that Adam Brackman is running for. He truly represent the concerns of all LGBT citizens in Atlanta and not just the concerns of those who happen to live in one district,” Graham says.

LGBT voters need to consider not just the sexual orientation of a candidate, but who is qualified and can win. We believe Steve Brodie is the strongest candidate in this race, having run in 2005 and coming within a handful of votes of election. He is a gay candidate who has been actively involved in issues that directly affect the interest of the voters, gay and straight: public safety, zoning, land use, the BeltLine, and the budgeting process. He has worked to prioritize public safety for major events in Piedmont Park, fix miles of sidewalks, and he successfully represented the neighborhood positions on land use issues. Steve played a significant leadership role in the start-up of the Safety Committee and Neighborhood Watch Program in Candler Park, and was a leader and fundraiser for the Midtown “Light the Streets” program. Many candidates who run for public office and do not win often get discouraged and disappear. Steve Brodie has remained deeply engaged in the community and the District he seeks to represent.