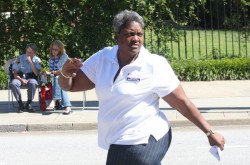 Yes, political gay. You have to vote one more time. Come on, it’s a duty of responsible citizenship, even if in Georgia you’re not a citizen with the right to marry.

With the thought of schlepping back to the polls Nov. 30 in mind, Georgia Equality reminded supporters on Wednesday of their slate of endorsed candidates who are now stuck in this post-Thanksgiving rush to the polls.

The statewide gay rights lobby endorsed 17 candidates on the ballot earlier this month. Ten of those won and two were sent to the runoffs — Jared Bailey for the Athens-Clarke Commission and Chris McFadden for the Georgia Court of Appeals.

Georgia Equality has since endorsed three more candidates in races where their original pick lost – Tammy Lynn Adkins for Georgia Supreme Court, Shelitha Robertson for Fulton Superior Court and Courtney Johnson for DeKalb Superior Court. The group, aided by supporters in and around Athens, also offers up a runoff endorsement of Gewn O’Looney for Athens mayor.

Another interesting factoid about the Fulton race: Robertson, who has lobbied for gay votes at several LGBT events including the Pride parade (photo), is an attorney credited with securing bail for the Eagle 8 when they were jailed in the botched Eagle raid in September 2009.

To recap, here are Georgia Equality’s endorsed candidates for the Nov. 30 runoff: