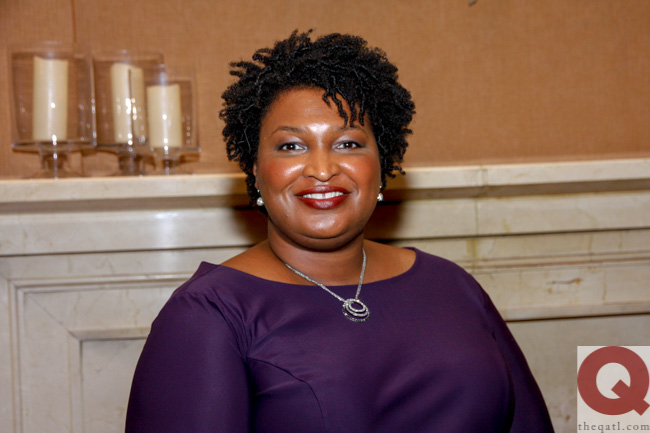 Political candidates and elected officials came out in force Saturday night for Georgia Equality’s annual Evening for Equality gala, with a showcase speech by an LGBTQ ally running for governor and $100,000 raised for the organization.

The fundraiser and awards show at the InterContinental Buckhead Atlanta drew about 350 people, but it was the attendance of one person — Stacey Abrams (top photo) — that drew the most attention. A long line of people seeking photos with the former House Minority Leader quickly formed as soon as she entered the ballroom, bringing to mind the rockstar-like reception Jon Ossoff received from Atlanta’s LGBTQ community during last year’s 6th Congressional District race.

Abrams became the first Democratic nominee for governor to attend the event (she attended last year before she had wrapped up the nomination), and she delivered a 15-minute speech that pulled the crowd to its feet numerous times throughout.

She recalled going to St. Mark United Methodist Church in Midtown as a child with her parents (both ministers) and siblings. They emerged from the church one Sunday to find an anti-gay march coming down Peachtree Street with people holding signs like “God hates gays.” The following year on the day of the march, Abrams said her parents organized the church members (“which was about 99.8% older white people, 14 El Salvadorians who did not speak English and the eight black Abrams people … our own Rainbow Coalition”) and stood outside the church holding signs that said “God loves gays. Welcome to St. Mark.”

“I tell that story because [Georgia Equality Executive Director] Jeff Graham is absolutely right — there is no space in the faith that I worship to discriminate against anyone,” she said referencing the recent years’ battles over so-called “religious freedom” bills. “I was raised to believe in a faith that was a shield to protect and not a sword to strike down, and when I become the governor of Georgia, that will never be a question in the state of Georgia.”

Abrams — who nabbed HRC's endorsement the day before the gala — reiterated her plan to pass comprehensive civil rights legislation, saying it was “our responsibility,” and shared some insight into her priorities should she take the governor’s race this fall.

“My first act will be the expansion of Medicaid in the state of Georgia,” she said. “Medicaid expansion is economically the right thing to do, but it’s also the moral thing to do. We live in a state with leaders who have been so mean and so cheap. They have turned away $8 million a day for the last four years. Eight million dollars that could be used to make certain that no one in the state of Georgia risks death from HIV and AIDS.”

She also referenced expanding Medicaid in a one-on-one interview with Project Q Atlanta before the event.

“Those are lives being lost and those are opportunities for support that could be properly invested and shape lives and make people healthier,” she said.

It’s now less than six weeks until Abrams finds out whether she will face Lt. Gov. Casey Cagle or Secretary of State Brian Kemp in the general election.

“My campaign began on May 23 for the general election, and while the Republicans figure out what they want to do, I am focused on meeting with and helping the people of Georgia as we move toward having the freedom and opportunity to thrive,” she said. “No matter who comes out of the July 24 runoff, our focus is not going to shift and our message is not going to change.”

There was a slew of other candidates and elected officials in attendance Saturday, including statewide candidates Sarah Riggs Amico for lieutenant governor, John Barrow for secretary of state, Richard Keatley for labor commissioner, Lindy Miller for District 3 public service commissioner and Kevin Able, who’s next up to challenge Handel in the 6th District.

The Georgia Equality staff and board later surprised Graham with an award marking his 10th year as executive director of the organization.