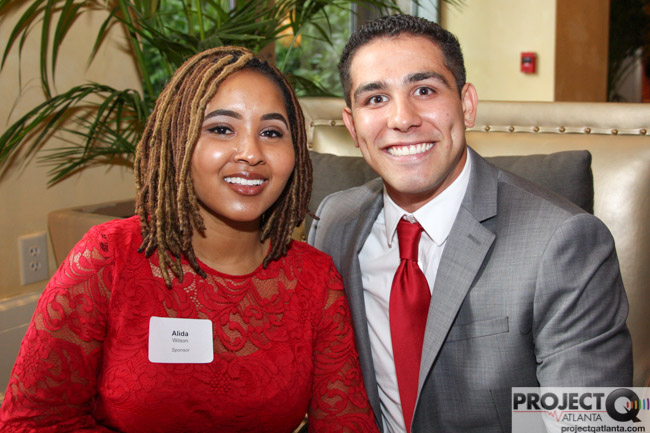 Georgia Equality celebrated its donors, supporters and heroes during the upscale 13th Annual Evening for Equality on Saturday in Buckhead.

About 350 people mingled during a reception and then an awards dinner at the InterContinental Buckhead Atlanta. The crowd was full of LGBT candidates and elected officials, along with several candidates courting gay support.

Also seen in the crowd were City Council member Alex Wan, who is running for council president; Kirk Rich, who is campaigning to for Wan's seat; and Liliana Bakhtiari, who is seeking the District 5 seat. All three are gay. Amir Farokhi, a candidate for the City Council District 2 post, and Robb Pitts, who is running for Fulton County Commission chair, were on hand too.

The event also honored an HIV activist, the mother of a transgender daughter and two groups that advocate for LGBT equality:

Last summer, Daniel became the first person openly living with HIV to address the Democratic National Convention in 20 years. Daniel is a graduate of GE’s Youth HIV Policy Advisory program, has founded THRIVE SS – a nonprofit focused on providing networking and services for black gay and bisexual men living with HIV and is the co-chair of the Fulton County Task Force on HIV/AIDS.

The Georgia Legislative Black Caucus, The Champion for Equality Award

As an organization, GLBC has taken the lead on educating the legislature on HIV/AIDS issues and has prioritized support for Comprehensive and Inclusive Civil Rights and Nondiscrimination legislation.  The caucus has been overwhelmingly supportive of Georgia Equalities issues at the General Assembly and, with very few exceptions, voted against the 2004 constitutional amendment defining marriage as between one man and one woman.  The Caucus has also leads on general issues of equality.

Jen is the mother of a transgender girl and has been very outspoken and public as an advocate for transgender rights in Georgia.  She has supported the work of Georgia Equality by her willingness to share her story so publicly. She is also very involved with PFLAG and the HRC Atlanta Steering Committee.

Georgia Equality is a founding member of ProGeorgia, which has begun to transform the political landscape of Georgia through coordinated civic engagement work that has registered more than 80,000 people to vote.  ProGeorgia had grown from a group of 12 organizations and a budget of $250,000 into a political powerhouse of 32 organizations with a budget of $1.3 million.  The focus of ProGeorgia has been to develop and implement strategic civic engagement efforts with a focus on voter registration and GOTV activities.

In 2016, Evening for Equality remembered the victims of the Pulse massacre in Orlando.