Need a reminder that this is election season? Just check the roster of elected officials and candidates on hand last week for Georgia Equality’s signature event.

The annual Evening for Equality honors the good work of LGBT activists and allies. But during election season — the primary is July 20 — the evening attracts a Who’s Who of progressive elected officials and candidates. The event on Thursday in downtown Atlanta at Ventanas was no exception.

“Our city is built on a diversity of voices,” Mitchell said in welcoming attendees. 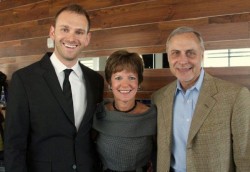 A humorous moment — at least for political wonks who watch this sort of stuff — came during the VIP reception prior to the main event. That’s when Eaves — who’s stumbling over same-sex marriage — turned in the crowd only to face Mary Norwood (third photo), the energetic former mayoral candidate who supports gay marriage and is now running to unseat Eaves. The two exchanged pleasantries and Eaves quickly moved away.

It’s unlikely to be that friendly on Wednesday. That’s when Norwood heads to court for a hearing in her lawsuit against Eaves over access to the ballot this fall.

“Because of the efforts of so many people here, we are able to make strides toward equality,” said Jeff Graham (bottom photo center), Georgia Equality’s executive director. “It is happening. We are on the right side of history. That’s what we are here to honor tonight.”