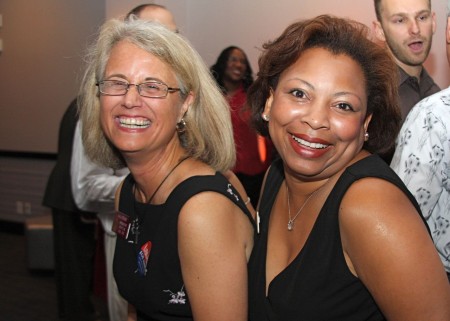 Do some good work on behalf of LGBT causes and you might just get feted one day in an upscale cocktail reception with a room full of boldface names.

That was the scene Saturday during the fifth annual Evening for Equality from Georgia Equality, the statewide gay rights group that tries to do good by the gays despite working from an island of political blue in a sea of red.

But back to those boldface names at the event, which took place inside the cavernous W Atlanta-Midtown that housed several events during Stonewall Week. The event, as is often the case, attracted a long list of LGBT elites and elected officials among the crowd estimated at organizers to be about 200 people.

Among the elected officials: Lisa Borders, the Atlanta City Council president who hopes voters give her a promotion to mayor in November. Neither of the other two major mayoral candidates — state Sen. Kasim Reed and City Council member Mary Norwood — were on hand, though Reed did have campaign staffers in the room.

Several of the region’s openly gay elected officials were there, too, including state Sen. Karla Drenner, Doraville City Council member Brian Bates and Decatur City Commissioner Kecia Cunningham. At least two others who want to be in that group were also present — Atlanta City Council candidate Alex Wan (right photo, top) and Kyle Williams (right photo, bottom), who is campaigning for the Decatur City Commission.

But beyond rubbing shoulders with some political and LGBT elites, Evening for Equality remained focused on calling attention to a handful of gay do-gooders with its Equality Awards. Four people and one group to be exact:

Cindy Abel (left photo, center) and Paul Horning (right photo, center), past board chairs of the Gay & Lesbian Victory Fund and Victory Campaign Fund, were cited for their contributions in helping to elect openly gay candidates around the country.

Ronald Moore, who received accolades for his service with several LGBT organizations, including Project Open Hand, Georgia Equality and Out & Equal.

Atlanta PFLAG’s Safe Schools Initiative, awarded for its works in training educators and administrators on dealing effectively with school bullying. Dale Merkle (right photo, center) accepted the award on behalf of the Atlanta Chapter of Parents Friends and Family of Lesbians & Gays

A final tally on how much the event raised for Georgia Equality was not available on Saturday.