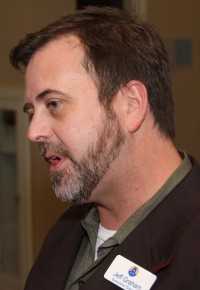 The statewide gay rights group Georgia Equality is calling on Mayor Shirley Franklin and the city’s top cop to answer 10 questions about a police raid last week at the Eagle.

The group also joined the chorus of political candidates and groups calling for an investigation into the Sept. 10 raid in which eight people were arrested.

“Members of Atlanta’s LGBT community have frequently given Mayor Franklin the benefit of the doubt for the last eight years, and now we expect some candor and honesty about the heavy-handed raid that occurred last week,” says Jeff Graham (photo), executive director of Georgia Equality. “We call on the Mayor to come forward and explain how this raid makes the city any safer, and whether this was really a wise use of the city’s scarce resources during a economic downtown.”

“The APD needs to explain why it is that their leadership chose to focus on things such as Go-Go Boy dancing, while at the same time muggers were attacking Georgia Tech students, and drug deals and prostitution continued unabated outside City Hall East. Atlanta deserves to know exactly who in the Franklin Administration played a role in orchestrating this raid, and what evidence they purported to have.”

“Civil rights and common decency should not be thrown out the window over men dancing in their underwear and alleged non-violent conduct, even if criminal issues are possibly afoot. Atlanta, as a city, can do better than this, and should strive to be a leader in the area of public safety.”

“A full, unbiased, and objective investigation of this raid needs to occur quickly before the Mayor and Chief Pennington leave office in the coming months. Our public officials must be held accountable for their actions and decisions with regard to public safety, the civil rights of Atlanta citizens, and the allocation of precious city resources during an economic downturn. The raid raises questions and concerns in all three of these areas which have yet to be properly addressed.”

The group demanded answers to 10 questions from Franklin and police Chief Richard Pennington:

• What concrete steps (such as written policies) will the Police Chief take to ensure that the APD’s LGBT Liaison Offer Dani Lee Harris is notified in advance and involved in the coordination and execution of future police actions affecting the LGBT community?

• How is the city any safer since the raid?

• What percentage of the officers on duty the night of September 10 participated in the raid?

• Why were so many officers needed to investigate non-violent dancing when violent crimes are occurring all over the city?

• How much did this raid cost taxpayers? What is the cost per charge/violation? How many work hours went into the investigation leading up to and the execution of the raid?

• What specific evidence led to the initiation of the raid? What documentation exists detailing that evidence? Why has the reasoning for the raid shifted over time?

• What actions were taken and what language was used by police during the raid and how were patrons treated?

• What training, if any, had the officers who participated in the raid received regarding LGBT community sensitivity and did they follow such training, written procedures, or policies?

• Why were individual arrested and held in custody 19 hours for ordinance violations?

• What guarantees will the APD make to ensure that the LGBT press, such as Southern Voice and Project Q Atlanta, are kept up to date as the investigation goes forward?

Georgia Equality also issued an open letter to Franklin, questioning “the city’s commitment to public safety, the civil rights of members of the LGBT community, and the city and APD’s management of scarce taxpayer revenue during an economic downturn.”

Last week’s Atlanta Police Department (“APD”) raid of the Atlanta Eagle raised a number of questions and concerns which are important, not only to members of the LGBT community, but to the citizens of Atlanta at large. The raid raises concerns about the city’s commitment to public safety, the civil rights of members of the LGBT community, and the city and APD’s management of scarce taxpayer revenue during an economic downturn.

While all of the facts regarding the raid remain unclear, certain details have become known. Twenty-one police officers and a five-month investigation led to the raid. During the raid, no drugs or other contraband were found on any individual and no illicit sex was observed. Instead, staff members were arrested and detained for nineteen hours for alleged ordinance violations.

In addition, it is also clear that in the last week of available crime data (8/30-9/5), the City experienced two murders, forty-two robberies, and thirty-eight aggravated assaults. In Zone 5, where the Atlanta Eagle is located, seven robberies and five aggravated assaults took place. While the crime statistics for the night of the raid are not yet available, it would be surprising if violent criminal activity was not occurring simultaneously with the raid.

On Monday, the APD held a press conference which generated more questions than answers. Georgia Equality calls upon the Mayor and Police Chief Pennington to investigate and fully explain a number of issues. First, the APD’s motivation, goals, and evidence that led to the initiation of the raid remain unclear and have had multiple shifting explanations over the past week. A full explanation of the events leading up to last week’s raid is required.

Second, eyewitness reports regarding how the raid was conducted are troubling on multiple fronts. Did police treat individuals with dignity and were all Fourth Amendment and other civil rights safeguarded? Why was the raid conducted with twenty-one officers when no violent criminal activity was suspected and why was the APD’s LGBT Liaison not notified of the raid in advance? What level of force was necessary to conduct the raid and what level was used? A full examination into the manner in which the raid was conducted is needed to ensure that all APD policies were followed and individuals’ civil rights were not violated. This investigation should also analyze whether internal APD policies, procedures, and/or training need to be changed going forward.

Finally, the raid raises serious questions regarding the management of the APD with respect to utilization of scarce resources to safeguard the community at large. The APD and the City must explain to the citizens of Atlanta how much the raid and investigation cost taxpayers and justify those costs in light of current budget issues. Further, the fact that a raid was conducted at all when no violent crime was suspected raises serious concerns about APD management given the rise of violent crime and property theft throughout the City and the lack of police resources to properly protect Atlanta’s citizens.

In all, Mayor Franklin and Chief Pennington must account for the motivations and evidence that led to an apparently unnecessary raid, the manner in which the raid was conducted and the treatments of ordinary citizens, and the costs and benefits of investing scare public resources to the raid when the APD, and the City as a whole, are dealing with dire budget shortfalls.