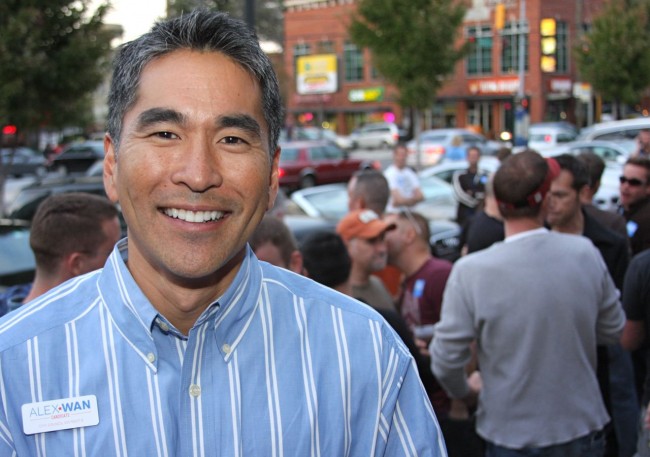 The board of Georgia Equality, which sat out the crowded race for the District 6 post on the Atlanta City Council, has unanimously backed Alex Wan, who placed first on Tuesday and is headed to a runoff.

Wan, one of three gay candidates and six overall vying for the post, won with 32 percent of the vote but that wasn’t enough to avoid a Dec. 1 runoff. He’ll face Liz Coyle, who narrowly defeated Tad Christian by 66 votes to capture second place.

“To me, it’s a vote of confidence in the race I’ve been running and all of the work I’ve done in the LGBT community,” Wan says. “I’m grateful and excited and look forward to working with them towards a victory on Dec. 1.”

When Georgia Equality offered its slate of endorsed candidates in September, it left out the District 6 race. The group’s board said the deep pool of candidates in the heavily-gay Midtown district stands nearly together on LGBT issues, so it opted to wait until an almost-certain runoff when their backing could prove pivotal.

With the race now headed to a runoff, the board moved quickly after Tuesday’s results to endorse Wan.

“We have been watching this race closely and had always planned to issue an endorsement once we saw who was in the runoff,” says Jeff Graham, executive director of Georgia Equality. “As an openly gay candidate, Alex has the deepest understanding of the numerous and complex needs of the LGBT community. Through his years of community activism and engagement with a broad cross-section of the greater Atlanta community, he has developed the skills necessary to govern effectively and represent the full diversity that defines Atlanta’s District 6.”

Wan says he’s heartened by Tuesday’s results, but cautioned supporters to stay focused on the race.

“The good news is that the results show a plurality of people in the district agreeing with the message of my campaign. Our strategy over the next four weeks is to continue getting the message out,” Wan says.

He added that the campaign will be reaching out to the four candidates who lost — gay men Steve Brodie and Miguel Gallegos, along with Tad Christian and Bahareh Azizi — to ask for their support.

The race now pits a gay candidate against a heterosexual one and if Wan wins, the seat would remain the only one occupied by an openly gay person. Anne Fauver, a lesbian, is completing her second term and Cathy Woolard, also a lesbian, represented the district before that. Wan says that although he hasn’t run only as a gay candidate, the 15-person City Council needs to have openly gay members.

“I have not run my campaign on the fact that I am a gay candidate. It really has been on the work I’ve done in the community, both in the LGBT community and the broader community. All things being equal, if that is something an LGBT voter feels strongly about and that throws their support to me, I am grateful,” Wan says.

“We get reminded every so often that there is still a lot of work to be done in changing hearts and minds in the broader community for equality for everyone. With that, it is important that we not only have friends at the table but we actually have members of our own at the table when decisions and policies are being discussed. It has not necessarily been a cornerstone of my campaign [but] I would be proud to be our community’s representative in city government,” Wan adds.

Wan was among 15 openly LGBT candidates in races across six metro Atlanta cities Tuesday. He and four others won, though Wan joins Simone Bell in the Dec. 1 runoff. Bell placed second in the race for the District 58 post in the state House. Georgia Equality endorsed Bell earlier this year.

Other gay candidates who won Tuesday include Brian Bates, a gay incumbent in Doraville; Johnny Sinclair, a gay Realtor who left the Marietta City Council in 2005 after two terms; and lesbians Kathie deNobriga and Melanie Hammet, both incumbents in Pine Lake.