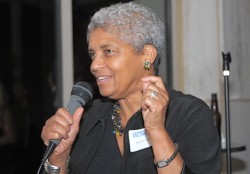 Just days after Georgia Democrats took another drubbing at the polls – this time giving up every major statewide office for the first time since Reconstruction – the party may be realizing that the gays and other minority groups can help save them.

On Saturday, the newly-formed LGBT Caucus of the Democratic Party of Georgia met for the first time, and party elders were there to pitch the party’s line. Is it time to celebrate a newfound awareness of LGBT issues by an otherwise muted state party? Too soon to tell.

But DPG Chair Jane Kidd (bottom photo) and former Atlanta Mayor Shirley Franklin (top photo) were on hand to talk to the gay politicos and show that the LGBT Caucus is one of several that the state party is creating. Other new caucuses include ones for African Americans, Asian Americans/Pacific Islanders, people with disabilities, Latinos, seniors and Native Americans. Hear the faint refrains of “Kumbaya”? 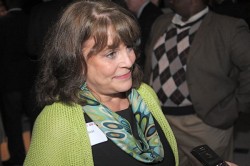 “We had a productive meeting,” Ken Britt, the LGBT Caucus vice chair, says in a press release. “We are excited about building a more inclusive group of motivated Democrats throughout the state.”

It’s a smart move by state Dems, but they’ll have to do more than lip service to motivate this rainbow coalition and make it appear something other then a new source of cash for the downtrodden party. Kidd and a host of top Democrats were short on gay-specific talk during a pep-rally and fundraiser with the LGBT Caucus a week before the election. Despite that, the LGBT Caucus awarded Kidd with its first Harvey Milk/Allen Thornell Award for her work in creating the caucuses.

“Our caucuses were created to make sure our party remains diverse and that all of our important constituencies are well-represented,” Kidd says in the press release.