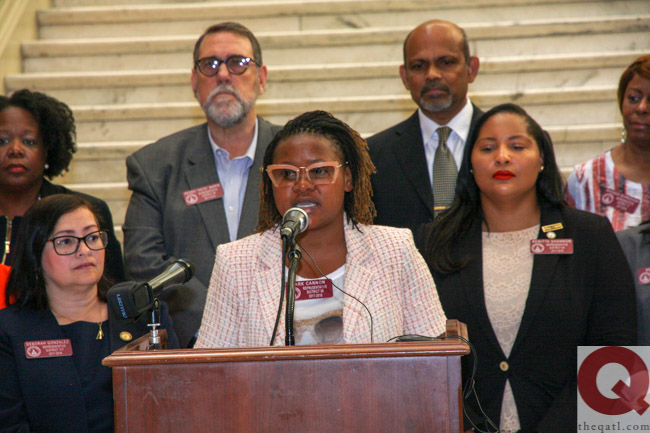 Democratic Georgia lawmakers warned of the damage that a Supreme Court with another conservative justice could do to progressive issues, including upholding anti-LGBTQ “religious freedom” legislation, threatening marriage equality and standing in the way of non-discrimination protections.

“As we stand here today and think about the egregious turnarounds that can come from a stacked Supreme Court, we think it’s time to sound the alarm,” said state Sen. Nan Orrock, a longtime vocal supporter of LGBTQ issues.

Orrock and other Democratic lawmakers spoke out Tuesday during a press conference at the State Capitol as President Trump considers naming a replacement for retiring Justice Anthony Kennedy.

“A lot of the rights that we Americans have worked and fought hard for are at risk of being ripped away at the stroke of a pen. The courts are no longer an objective, unbiased, non-political entity,” state Rep. Deborah Gonzalez said.

Rep. Bee Nguyen read a note from Rep. Sam Park, the first openly gay man elected to the Georgia legislature. In it, Park said the recent Masterpiece Cakeshop ruling demonstrated the need for an LGBTQ-inclusive statewide non-discrimination bill in Georgia that covers employment, housing and public accommodations. Park co-sponsored such a bill in this year’s legislative session but it failed to gain any traction.

Park also decried anti-LGBTQ “religious freedom” bills that have dominated the discussion at the Capitol for several years, calling the legislation unnecessary.

“We must put an end to using religion as a sword to attack minority communities,” Park said in the note.

Some progressives have also raised concerns that a Supreme Court with a new conservative majority would strike down the court's marriage equality decision from 2015.

“There are First Amendment opportunities for people to express their religious beliefs,” said Rep. Park Cannon (photo center), one of four openly LGBTQ lawmakers in the legislature. “We do not believe that that should continue to overrule our issue related to marriage equality. People should be able to love and care and take care of the individuals who they decide to.”

The lawmakers addressed a number of other issues that could be in peril with a more conservative Supreme Court, including a woman’s right to choose, the environment, voting rights, workers’ rights, affirmative action, immigrants’ rights and legislative redistricting.

Orrock also singled out Georgia’s U.S. Senators Johnny Isakson and David Perdue. She cited Senate Majority Leader Mitch McConnell’s decision in 2016 to suspend Senate hearings for President Obama’s Supreme Court nominee because, as McConnell said at the time, it was an election year.

“It’s just a 100 and a few days counting until major elections across this nation,” Orrock said. “You have a president who is under criminal investigation who would be choosing his judge at the Supreme Court were we to go ahead and ratify a Trump appointee. So we’re calling on our senators to stay consistent. Don’t be hypocritical.”